The ongoing World Cup has been hit by the rain and there is a possibility more games will be affected due to the bad weather.

Bangladesh versus Sri Lanka game became the third match of the ongoing ICC Cricket World Cup 2019 to be affected by the rain. Sri Lanka’s previous match, where they were to take on Pakistan, was also a wash out. A few days back, it was the South Africa versus West Indies game which had to be called off after 7.3 overs.

After the match on Tuesday was called off due to rain, Bangladesh coach Steve Rhodes questionned the lack of reserve days in the tournament.

We put men on the moon, so why can t we have a reserve day, when actually this tournament is a long tournament. They are spread out, the games. I would say that it s disappointing for the crowd, as well. They have got tickets to see a game of cricket, and you know, it would be up to them if they can get there the day after.

In the wake of these comments, Dave Richardson, ICC Cricket World Cup CEO, had defended the scheduling of the tournament.

“Factoring in a reserve day for every match at the ICC Men s Cricket World Cup would significantly increase the length of the tournament and practically would be extremely complex to deliver,” said Dave Richardson in a statement released by ICC on Tuesday.

“It would impact pitch preparation, team recovery and travel days, accommodation and venue availability, tournament staffing, volunteer and match officials availability, broadcast logistics and very importantly the spectators who in some instances have travelled hours to be at the game. There is also no guarantee that the reserve day would be free from rain either,” he added.

While there are reserve days for the knockout games, the group stage encounters don’t have any reserve days. Throwing the light on the same, Richardson said: “Up to 1200 people are on site to deliver a match and everything associated with it including getting it broadcast and a proportion of them are moving around the country so reserve days in the group stage would require a significant uplift in the number of staff. We have reserve days factored in for the knock-out stages, knowing that over the course of 45 group games we should play the large majority.”

Richardson then highlighted the fact that there has been “more than twice the average monthly rainfall for June”. A month which generally happens to be “the third driest month in the UK”.

“This is extremely unseasonable weather. In the last couple of days we have experienced more than twice the average monthly rainfall for June which is usually the third driest month in the UK. In 2018 there was just 2mm of rain in June but the last 24 hours alone has seen around 100mm fall in the south-east of England,” said Richardson.

“When a match is affected by weather conditions, the venue team work closely with Match Officials and Ground Staff to ensure that we have the best possible opportunity to play cricket, even if it is a reduced overs game. We also work to keep fans in the stadium, or those travelling to the game, as up-to-date as possible with any information we have, either through public announcements or on our social media channels,” he concluded. 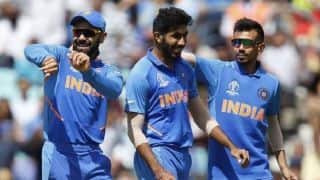 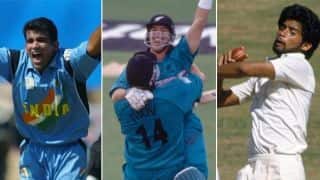