Two washouts and a potential one in Bristol has added to the fans' frustration this summer.

BRISTOL: Two washouts, the threat of more to come this week across England, injuries to several cricketers and ticket troubles have made news over the past week of the ICC Cricket World Cup 2019. And then there was the uproar over MS Dhoni’s gloves, which thankfully ended amicably.

Summers in England are often hit by rain – which makes last year’s heat wave across the country such an anomaly – but worries over cricket matches receded when the first week of matches went by relatively unscathed. The only match interrupted by rain, but which was completed, was Sri Lanka vs Afghanistan in Cardiff during the first few days of the World Cup.

In between these two Bristol fixtures, the match on Monday between South Africa and West Indies was called off due to rain in Southampton. Only 7.3 overs were possible in that match, which came after India beat South Africa at the same venues a few days earlier on a pleasant day.

The forecast for Australia vs Pakistan in Taunton on Wednesday, India vs New Zealand in Nottingham on Thursday and India vs Pakistan on Sunday in Manchester also includes rain.

The World Cup does not have reserve days, which adds to the growing sense of frustration from cricket fans around the world. For the many who live in England, and those who have traveled here, the forecast of rain across the country is a real dampener.

Two Bangladesh cricket fans who have traveled to England from Dhaka, stand under umbrellas at Bristol’s Country Ground watching the drizzle on Tuesday morning. They are of course frustrated, and expected rain to be a factor when they booked tickets six months ago.

Last week, three Pakistan supporters drove to Bristol from Yorkshire – about 250 kilometres – in hopes of watching their team beat Sri Lanka. Like many, they went home bitterly disappointed. Tickets are not cheap, and when UK residents have to take off from work early or figure out baby-sitting options, a washed out match makes for a major disappointment.

And on top of this, beyond the rain, there is a series of player injuries.

First was South African fast bowler Lungi Ngidi, who injured himself during his team’s second match of the tournament. Then, a day before South Africa’s match against India at the Rose Bowl, news broke that Dale Steyn was out of the World Cup.

Next to go was Afghanistan’s popular wicketkeeper-batsman Mohammad Shahzad, who on June 7 was ruled out of the World Cup with a knee injury. A couple days later, Shahzad alleged that he was being kept out by other forces.

On Tuesday (June 11), news broke from the Indian camp that Shikhar Dhawan‘s thumb injury, sustained while he was batting against Australia at Kennington Oval on Sunday, was more serious than it initially looked. Initial reports were that Dhawan was ruled out of the World Cup, then for three weeks. CricketCountry learned that Dhawan had been assessed by Patrick Farhart, the Indian team’s physio, in Nottingham and was then sent to Leeds for a further medical assessment.

An hour later, confirmation came that the Indian team had to cancel its training – scheduled from 2pm to 5pm local time – because of rain in Nottingham.

A little later, there was news that Australian allrounder Marcus Stoinis was to fly home with an injury.

Other players to miss matches are Andre Russell, who sat out the washout against South Africa, and Sri Lanka fast bowler Nuwan Pradeep who is not part of the Bristol fixture. In between these unfortunate incidents, the ICC was also left red-faced after it failed to print tickets for the World Cup match between West Indies and Pakistan at Trent Bridge.

All this, against the backdrop of general English apathy towards the World Cup, has not made for a very smooth tournament so far.

The ICC officials that CricketCountry has spoken to across venues share the fan’s anguish, but with the tournament rules set in stone there is nothing that can be done. All we can do is hope and pray for the rain to stay away. 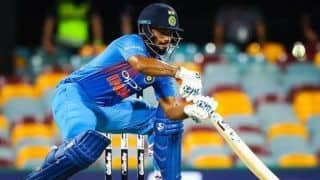