There is more rain forecast for India vs New Zealand on Thursday in Nottingham.

BRISTOL: The Indian cricket team’s scheduled training session at Trent Bridge has been cancelled on account of rain in Nottingham, where they are due to play New Zealand in game 18 of the ICC Cricket World Cup 2019 on Thursday.

India landed in Nottingham from London, where they beat Australia by 36 runs on Sunday, to be greeted by overcast conditions and wet weather. The Indian team was scheduled to have a practice session from 2pm to 5pm local time, but official word came in from the management at 10:51am that rain had forced training to be cancelled.

There is further bad news, with the forecast for Thursday showing more rain.

The Indian team is also struggling with Shikhar Dhawan‘s thumb injury, sustained during the win over Australia at Kennington Oval. Dhawan is expected to be sidelined for up to three weeks with a suspected hairline fracture.

CricketCountry has learned that Dhawan was sent to Leeds for further assessment, and that he stands to miss the game with New Zealand at Trent Bridge and Sunday’s match between India and Pakistan at Old Trafford.

The forecast for Manchester on Sunday is for further rain.

The World Cup continues to be hit by rain. One match – Sri Lanka vs Pakistan at Bristol last week – was washed out without a ball bowled. On Monday, South Africa vs West Indies in Southampton was washed out after 7.3 overs.

Today’s match in Bristol between Sri Lanka and Bangladesh looks set to be called off too, with steady drizzle over the County Ground all morning making chances of play very slim.

Wednesday’s only World Cup match is between Australia and Pakistan in Taunton, where the prediction is for 40% rainfall. 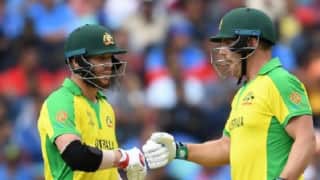 Cricket World Cup 2019: Finch and Warner are probably as good as openers in the world: Ricky Ponting