Warner will definitely miss walking out with Rogers, strategising with him for, and the familiarity of their excellent start together.

The Ashes 2015 began with an Australian side that was yet to get over their ICC Cricket World Cup 2015 triumph. The England whitewash Down Under in Ashes 2013-14 would have been fresh in their minds. However, the next couple of weeks came like a tornado leaving everything shattered with repercussions. At the end of this series there is sure to be an at least partial overhaul of the side. The major change in the team will be the termination of a beautiful opening pair: David Warner and Chris Rogers. Sakshi Gupta explains why Australia will miss this pair the most. Live Cricket Scorecard: England vs Australia, 5th Test, The Oval, Day 3

After the 2006-07 season — that saw the final glimpses of Mathew Hayden and Justin Langer walking into the field together in the whites — the Australians struggled to build an opening partnership as fruitful as theirs. A legacy of 5,655 runs from 113 innings that included 14 century stands was never going to be easy to replace. For a while, it did not look like they would find much stability at the top. That changed in 2013 when Cricket Australia recalled Rogers for their tour to England. The stunning partnership took a couple of games to kick-off.

Rogers partnered Shane Watson in a couple of innings, putting up 245 runs together for the first wicket in those games. After missing the first two Tests of the 2013 Ashes, Warner was included in the third one at Manchester and it was then that the selection committee made one of their best decisions.

The duo needed just three innings to reach their very first 100-run stand, and that was followed by an addition of eight more such stands in the next two years, which gave Australia excellent starts in various Tests. Be it at home or in South Africa, UAE, India or England, Warner and Rogers dominated the new ball everywhere. Since both batsmen have their respective styles of play, their partnership was a balanced one, and that turned out to be one of the vital reasons behind their success as openers. READ– Ashes 2015: The Oval to turn blue for Cricket United charity on Day 3 of 5th Test

The fourth Test against India at Sydney in 2015 was the pinnacle of their partnership; it was their only 200-run partnership. They made sure the run-rate did not slip down below four which was an outstanding effort especially in the longer format of the sport.

The 2014 series against South Africa was another tour where Warner and Rogers flourished. Beating the top-ranked team in their own backyard was one of the greatest achievements of the Australian side and a large part of their success was owed to the two hundred-run stands provided by the openers. If the 126 runs which they had scored together in the opening game led to a draw at Port Elizabeth, Warner and Rogers once again came back with an unstoppable run in the last game at Cape Town with 65 in the first innings and 123 in the last. While it was Warner who had scored a ton in both the innings, Rogers ensured that South Africa did not get a sniff at the other end.

The numbers speak volumes about their excellent alliance. From 2011 to 2013, Warner was accompanied by Ed Cowan to open batting for Australia, and the duo scored 1,256 runs from their 28 innings together. Meanwhile, Rogers and Warner have put on 2,053 runs in 41 innings at 51.32. They have been by far the most prolific opening duo in Test cricket over the last couple of years. READ: #ChangeCricket succeeds at The Oval during Ashes 2015!

The 37-year-old Rogers, who is at most one innings away from bringing curtains down on his international career, has already bagged 3,882 runs from a mere 24 Tests at a decent average of 442.86. While the Australian team will strive to establish yet another magnificent opening pair in Tests, Warner will definitely miss walking out with Chris Rogers, strategising with him for, and the familiarity of their excellent start together. 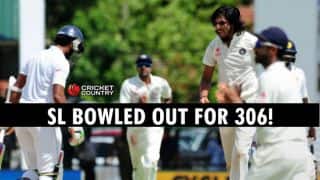