Morgan also became the batsman with most number of sixes (17) in an ODI innings as England scored 397/6 against Afghanistan.

Eoin Morgan cut loose and took the Afghanistan bowling attack to the cleaners as he scored a fastest hundred in World Cup 2019.

The England skipper brought up his hundred in 57 balls in the 24th match at the Old Trafford in Manchester.

Morgan came out to bat in the 30th over to join Joe Root after Jonny Bairstow got out. The two added 189 runs in 101 balls, with Morgan dominating the scoring. He hit as many as 17 sixes in his 71-ball 148-run knock.

Morgan, who was dropped when he was on 28, made the most of that reprieve and scored a 57-ball hundred, which now is the fourth quickest hundred in the World Cups.

Morgan, who hit 17 off 25 England sixes, surpassed Rohit Sharma, Chris Gayle and AB de Villiers, all of whom, had hit 16 sixes in an innings to top the chart of the most sixes for a batsmen in an innings.

Morgan also became the batsman with most number of sixes in a World Cup match, surpassing Gayle, who had hit 16 sixes against Zimbabwe during his double hundred in the previous edition of the World Cup.

In addition to his 17 sixes, Morgan hit 4 fours as he scored as many as 118 of his 148 runs in fours and sixes. Such was Morgan s onslaught that even Rashid Khan, Afghanistan s premier spinner, went for 110 runs in his nine overs. 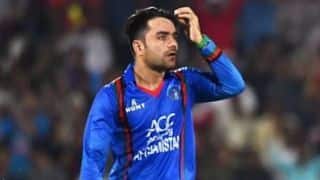