The top five controversies that rocked the 11th edition of cricket’s showpiece event.

The ICC Cricket World Cup 2015 came to a close with Australia thumping co-hosts New Zealand by seven wickets. While the eleventh edition of cricket’s showpiece event was a successful one, if one looks at the overall scheme of things, it had its own share of controversies. Amit Banerjee explores further on the incidents that threatened to disrupt the harmony and spirit of cricket.

Steve Smith hit Matt Henry towards square leg to bring up the winning runs for Australia during their ICC Cricket World Cup 2015 final against New Zealand. It was a fitting, albeit one-sided finale that ultimately saw the home team lift the trophy in front of a crowd that is nearly 1,00,000 strong. Skipper Michael Clarke dedicated the World Cup in memory of the late Phillip Hughes, with Clarke bowing out of One-Day Internationals (ODI) in style, while the Brendon McCullum-led New Zealand managed to hold their heads high due to a terrific performance that saw them reach the World Cup final for the first time. Read: Australia beat New Zealand in ICC Cricket World Cup 2015 Final, win World Cup for fifth time

The tournament though, was not without its share of controversies, something that one takes for granted in a tournament as major as this. From the Rohit Sharma no-ball incident, which started a massive storm in the subcontinent in particular, and the cricketing community in general, to the John Mooney catch-incident, the tournament has given the fans of the sport a glimpse of its dark side. Following are the top five controversies that rocked the 11th edition of cricket’s showpiece event:

1. Rohit Sharma no-ball: If there was an incident in the recently-concluded World Cup that could be crowned the ‘Mother of all Controversies’, it has to be this. Bangladesh had qualified for the knockout stage of a World Cup for the first time, and were quiet confident they could defeat India, who were easily crowned the favourites due to their performances in the group stage. ICC Cricket World Cup 2015: The CricketCountry XI

Rohit had struck form, and was batting fluently on 90, ten runs away from his seventh ODI century, when he decided to hit a Rubel Hossain full-toss towards square-leg, where the fielder took a comfortable catch. The Bangladeshis did not celebrate the massive dismissal as umpire Ian Gould had already signalled the delivery ‘no-ball’. Replays later showed the umpire’s decision to be a contentious one, with the delivery trajectory seeming to be fairly within the permissible height. Rohit went on to add 47 runs to his account, as India finished on 302 for six, before bowling Bangladesh out for 193. Cricket World Cup finals XI: Players who were outstanding on the day of finals

It was one of the decisions that the Bangladesh camp had accused of being “biased”, with Shikhar Dhawan’s catch to dismiss Mahmudullah being one of them. The Bangladeshis, who are known to be extremely passionate for the sport, decided to raise cries of ‘biased treatment’ against them, going to the extent of calling the ICC “Indian Cricket Council”. If ICC President Mustafa Kamal’s threat of resigning from his post was a major response, it was topped by the country’s Prime Minister Sheikh Hasina going on record to point her finger at ‘shoddy umpiring’ as the cause for the exit of the ‘Tigers’.

2. John Mooney’s controversial catch and personal attack: The controversy brewed during as well as after the Pool B match between Ireland and Zimbabwe. The Irish set a challenging 332-run target for Zimbabwe, who were looking set to chase it down with 26 needed to win with four wickets in hand, and a certain Sean Williams batting on 96. The Zimbabweans had earlier recovered from a series of early jolts thanks to a valiant century by Brendan Taylor (121). Michael Clarke retires from ODIs: Battered, bruised but not beaten

Williams struck the penultimate delivery of the 47th over towards deep square-leg, where Mooney took the catch right at the edge of the boundary. The on-field umpires decided to consult their TV counterpart, with the decision appearing to be a tough one after numerous replays after Mooney’s foot appeared to be touching the boundary rope. The decision was eventually given in favour of the fielding team, as Zimbabwe collapsed to a five-run defeat.

The narrow loss did not seem to go down well with a certain section of the Zimbabwean population, with Zimbabwe Herald, a daily based in the Southern African nation, targeting the bowler with the headline “Alcoholic dumps Zim out of WC”. It was met with great criticism, with both teams uniting against the attack that the newspaper had launched on the cricketer’s personal life.

3. James Taylor stranded on 98 not out due to umpiring error: Australia gave signs of what was to come ahead in the ICC Cricket World Cup 2015 when they flattened England by 111 runs in their tournament opener at the Melbourne Cricket Ground on February 14. While the Aussies were the firm favourites to win the match, England were not expected to surrender so meekly.

There were a couple of impressive individual performances in the England line-up though, with Steven Finn’s hat-trick and James Taylor’s unbeaten 98 being the most worthy ones to be mentioned here. Taylor defied the Australian attack that consisted of the three Mitches (Johnson, Starc and Marsh), as well as Josh Hazlewood. A World Cup century would have been a consolation for an otherwise forgettable start to the World Cup for the 25-year-old. Australia vs New Zealand, ICC Cricket World Cup 2015 final: Seven similarities with past World Cup finals

The controversy occurred when Taylor was trapped leg-before off Josh Hazlewood, with the umpire raising the finger. The batsman went for the review, and the delivery was found to be missing leg-stump. However, Taylor had attempted to take a single with James Anderson, who was caught short of his crease due to a direct hit from Glenn Maxwell. The umpires adjudged Anderson run-out, denying Taylor his maiden ODI century. According to the ICC rules, the ball was deemed to have been dead following the umpire originally ruling Taylor out, which technically should have nullified Anderson’s run-out. While the change of decisions would not have made any impact on the result otherwise, the incident simply left a bad taste.

4. Majid Haq’s tweet: Scotland were turning out to be an unlucky bunch, having missed out registering their maiden World Cup victory in a narrow defeat at the hands of Afghanistan as well as against Bangladesh. Haq, Scotland’s leading One-Day International (ODI) wicket-taker of Pakistani origin, was having a lean patch in the tournament so far, and was dropped as such for Scotland’s penultimate fixture against Sri Lanka.

Haq however, decided to use the social media to vent his feelings out, and the tournament was suddenly in the headlines, perhaps the first time for racial reasons. “Always tougher when your in the minority!! #colour #race,” Haq was quoted as posting on his official Twitter account. The tweet caused Haq to be sent home immediately, casting a shadow over the off-spinner’s future. ICC Cricket World Cup 2015: Top 10 spells

5. Chris Jordan run-out: It was a match that was destined to be one of the greatest in the history of Bangladeshi cricket. The eternal ‘whipping boys’ of Test cricket looked to deliver the knock-out punch to a hapless England, who were perhaps going through what can be argued as one of their worst World Cup campaigns, at the Adelaide Oval. Bangladesh rode on Mahmudullah’s century to finish on 275 for seven.

England were reeling at 163 for six, looking set for an embarrassing collapse, when Chris Woakes added 75 runs for the seventh wicket with Jos Buttler, who promptly dismissed for a 52-ball 65 shortly afterwards, and Jordan was caught short of his crease off the very next delivery to script an amazing turnaround in the match. ICC Cricket World Cup 2015: Top 10 innings

The bone of contention however, was the fact that Jordan’s bat seemed to have bounced in the air after making ground as the bails came off at Jordan’s end. According to the ICC rules, a batsman shall be considered to be out of his ground unless his bat or some part of his person is grounded behind the popping crease at that end. Exceptions, however, are given for cases where a batsman has grounded his foot behind the popping crease, and his feet lose contact with the ground due to a state of motion as the bails come off. Unfortunately for Jordan, bats are not a part of the deal.

England went on to lose the game by 15 runs, crashing to their third first-round exit from a World Cup. Many an England supporter however, fumed about Jordan’s decision long after, including former England cricketers Michael Vaughan and Sir Ian Botham. 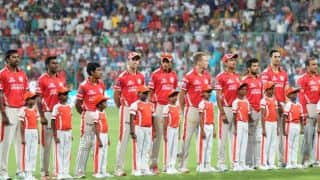