Australia went from strength to strength in England, until they were smashed in the semis.

BIRMINGHAM: Did Australia deserve to win this World Cup? That is a question many wondered when Australia became the first team to enter the knockouts. Here s another. What is the criteria to win the World Cup, apart from playing well in the tournament? Who is the most? A team that turns up and performs well throughout the showpiece event, by picking pace at the last moment to mask a recent slump or one that has been the most consistent in the last four years?

In a perfect world, the answer would be the second one. But cricket is rarely about perfect worlds, fitting finishes and destinies. Australia did enormously well to reach the semi-finals, only to be undone by a side that has been the most consistent in the last four years.

2018 was a horror year for Australia. They were blanked 0-5 on English soil, slipped to sixth in the ODI rankings and lost bilateral series to South Africa and Australia at home. Only the most optimistic of Australian cricket fans could have given them a chance at the World Cup. The void left by Steve Smith and David Warner s absence was seemingly irreplaceable. Yet, when the new year rolled on, Australia’s fight-till -the-end attitude returned. It began with the series against Pakistan, where out of the blue, Aaron Finch‘s horror run came to an end and the Australia captain reeled off 451 runs to lead a 5-0 demolition of Australia.

The tour of India was even better, marking a spectacular come-from-behind win to claim the series 3-2. Suddenly. Australia, like the famous video game series Hitman, stealthily, were in the race for a World Cup win. When they ripped through England and pummelled New Zealand to become the first team to enter the final four, Finch’s statement “Australia have always done well at the World Cup” began reverberating in the ears.

With Smith and Warner back, this was the mighty Australia peaking at just about the right time. After all, this is the World Cup, where Australia have succeeded more times than any other side. They consider this their tournament. This is far bigger than the Ashes or the rivalry against India. This is the World Cup. Defending champions or not, Australia believe the crown is theirs to defend.

In the World Cup, they kept going from strength to strength. After being bowled out for 207 against Afghanistan and reduced to 38/4 against West Indies, a loss against India followed, but even there, Alex Carey‘s brilliance came to the fore before India’s bowlers closed out the game. From there, however, Australia never looked back. With strong wins against Pakistan, Sri Lanka and Bangladesh, Australia regrouped and fired on all cylinders against England and New Zealand.

But their luck ran out on against a side that has had a fair amount of success against them in recent history. Prior to the 5-0 drubbing, England had also taken the series in Australia 4-1. The record for the highest team total is by England, their 481 coming against Australia. With a win at Lord’s, Australia may have won the opening round, but at Edgbaston, England romped them in the contest that held more significance.

They didn’t do too much wrong in this game. Mitchell Starc and Jason Behrendorff started well in a small chase, just to be put on the back foot by a brilliant innings from Jason Roy. Starc did finish with the most wickets in a single edition of the World Cup, but he conceded runs at over 7.7 an over. It was stunning, at times unbelievable to see Roy plunder Starc the way he did. Roy s confidence stemmed from the fact that England were chasing just 223 on a surface that had only become better for batting as the day progressed.

England won by almost 18 overs to spare. The surface was same, conditions identical. Just two polar opposite batting performances. After 496 runs in first seven World Cup innings, Finch’s last three scores have been 8, 3 an 0 the first time in his ODI career that the Australia captain has collected three consecutive single-digit scores. When he and Warner, or either of the two blaze away, Australia make a game out of it. Against England, neither did and Australia s lack of depth got exposed.

At No. 4, Usman Khawaja was missed, and taking his spot for someone Australia did not even have in their original 15-member squad. Australia required the kind of innings he had played against New Zealand. Instead, they got a 12-ball 4. Carey, the find of the tournament, the third-highest scorer for Australia with 375 runs at an average of 62.5 was only promoted up in the semi-final, where the 27-year-old played the bravest innings in recent memory. With a gash on his cheek, Carey batted with a wraparound bandage. The blood was dripping yet Carey remained unflustered. A Test berth should be on the horizon.

If the batting and its order looked out of place, the bowling shaped a lot better. Without Starc, Australia may have not beaten West Indies, Pakistan, New Zealand or even England. With Behrendorff coming in, Australia lost out on the Starc and Pat Cummins combination. Cummins started off with a bang 11 wickets in the first five matches, but ever since he was brought in as first change, in the last four match, he has just 2 wickets. The average of 18.8 drops to 93 and even though teams were happy blocking him, his economy rate fell from 4.5 to 5.6.

The rest fired in patches. Adam Zampa, Nathan Lyon and Nathan Coulter-Nile had their moments but nothing spectacular to produce the nitro-booster they probably could have done with. Mix all these elements together and Australia had to bow out. The dreaded list of first that had been hurting Australia last year first 0-5 drubbing in bilateral series, first time slipping to such low rankings, losing a Test series to India for the first time in 70 years has a new addition, losing in the semi-final of a World Cup.

With an unsettled unit, Australia went into the World Cup with a gamble. For a while it paid off, but the lingering issues caught up. They could have beaten the abysmal South Africa to finish on top and faced New Zealand but couldn t. Having said that, Finch and Co. pressed above their weight and brought back shades of the ruthless Australia the world is aware of.

Then again, the cracks were a bit too many for a sandpaper to cover up. 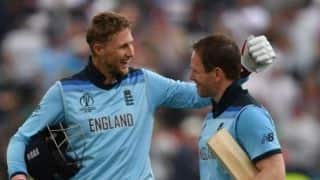 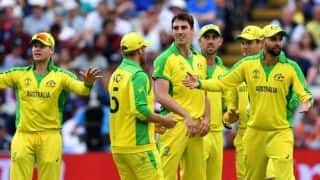