With Rahul and Vijay out of form, India need to change their openers; but it is not straightforward.

The woeful form of India‘s openers for the first two Tests in Australia, KL Rahul and Murali Vijay, has raised questions over the futures of both batsmen, and with the series now level after Australia’s hammering of India in Perth, the Boxing Day Test at the Melbourne Cricket Ground has become a must-win for Virat Kohli’s team.

A week remains before the third Test, and each time India hit the nets the focus on Rahul, Vijay and the other opening options will be immense. The BCCI selectors on Monday called up the Karnataka and India A batsman Mayank Agarwal to the Test squad while confirming that teenaged opener Prithvi Shaw  would play no further role in the tour.

Much had been expect from 19-year-old Mumbai batsman Shaw, who scored 66 from 69 balls on day two of India’s tour match at the SCG last month before a freak ankle injury ruled him out of the Adelaide and Perth Tests. Shaw’s apparent failure to recover fully forced the selectors to add the uncapped Agarwal to the squad, which gives rise to the feeling that he could make his Test debut at the MCG.

Logically, Agarwal was the next in line to be called up as opener given that he was part of India’s Test squad against West Indies last month and has been a key member of India A’s success this year. Most recently, Agarwal scored 65, 42 and 42 for India A in two four-day fixtures in New Zealand.

He finished the 2017-18 domestic season with a record-breaking 2,141 runs to push his case for India selection, which saw him top the Ranji Trophy run chart with 1160 at 105.45, including three hundreds – a best of 304 not out – and two fifties. As part of the India A tour of England, Agarwal was his team’s leading run-getter with 287 from four one-day games as they won a tri-series with England A and West Indies A. In the four-day matches, he made 68 against West Indies A and 1 versus England A.

Back in India, the 27-year-old continued his rich vein of form by scoring 236 runs in a quadrangular tournament at an average of 59 for winners India B. This included 124 versus India A and 69 against Australia A in the final in his home city of Bengaluru, which followed a double-century for India A versus South Africa A during a four-day match.

A Test debut for Agarwal is not that straightforward, because this is Kohli’s team and dubious selection calls have become a theme with the No 1 ranked team, who suffered their seventh Test loss of the year in Perth this week to equal India’s all-time worst streak in a calendar year.

India have in their squad Parthiv Patel, whom the Indian team management opted to play as an opener two years ago when he was recalled after a long gap. Patel, 33, played two Test in South Africa in January, batting at five, six and as opener in four innings. Anything is possible with this Indian team, so if Parthiv gets the nod and walks out to open at the MCG it would be a surprise.

A left-field selection would be to get back Rohit Sharma and make him open. Rohit opens for India in limited-overs and does a damn fine job of it – he is ranked second in ODIs and ninth in T20Is – and while Test cricket is a different kettle of fish, there is the argument that he could do no worse than the walking wickets that are Vijay and Rahul.

The pair averages 20.88 together in Tests, which is the worst for any opening pair in the history of the game (minimum 25 innings). Rahul’s Test batting average this year is 22.28 from 22 innings. Subtract the 149 he scored in the last innings of the England tour and that falls to 14.84. Vijay averages 18.80, a number boosted by 105 against Afghanistan, which is his only 50-plus score of 2018 in 15 Test innings.

In Adelaide, Rahul was out in the second over of the Test when he steered Josh Hazlewood to third slip with an expansive drive. On day four, after adding 63 with Vijay – their first in excess of 50 outside of India – Rahul did not even bother to get a sighter of Hazlewood who was called back into the attack, and in two balls had the opener flashing at a wide ball and edging to Paine.

Once again, as so often with Rahul, the wicket was not the bowler producing something exceptional. The ball was full, wide and fast and Rahul couldn’t curb his enthusiasm.

Four innings, 48 runs, of which 44 came in one innings. Around that knock which promised so much more, Rahul has scores of 2, 2 and 0. Are his problems mental or technical? Experts have and continue to debate this, but no matter which angle you observe the 26-year-old’s batting, it is stark that he is a batsman in a terrible funk. The hands are going hard, the feet aren’t moving fast enough and the manner of bowled dismissal indicates that Rahul needs a break before he’s shattered further.

As the veteran cricket reporter R Kaushik wrote in these pages after Rahul’s second failure in Perth, his fate may no longer be in his hands anymore.

His opening partner Vijay has fared no better. In four innings, the 34-year-old has managed 49 runs with a best of 20. Thrice he’s been dismissed by Starc.

At Adelaide Oval, playing his first Test in nearly four months, Vijay got 11 off 22 balls and 18 off 53. On the first morning, he departed to an ill-advised waft away from the body and edged to Tim Paine. A nothing shot, as the cliche goes, from a batsman who would not have played that Test had Shaw not injured himself during the tour game. On the fourth evening, moments after losing Rahul for 44, Vijay poked at Starc and edged to second slip.

In Perth, Vijay made 0 and 20. In India’s first innings he was bowled for a 12-ball duck when missing a leaded-footed drive at Starc; on day four, a drive at a ball from Nathan Lyon that pitched in rough took the inside edge and rattled the stumps. 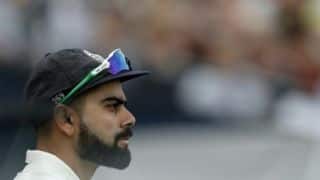 Watch out for India, they can win the remaining two Tests: Sourav Ganguly 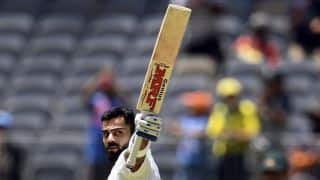