In his heart of hearts, Rahul must believe that he has played his last Test on this tour.

PERTH: It was just the kind of start India would have dreaded and Australia would have wished for. With the cracks widening, the pitch playing tricks by the minute, and given the inexperience of the lower middle order and the extreme fragility of the four-man tail, to say that India needed to get off to a good start in their quest of an intimidating target will be an understatement.

The tiny bubble of optimism in the Indian ranks was burst within the first four balls of their stiff chase of 287 at the Perth Stadium on Monday. KL Rahul, his career on the line after a string of indifferent performances either side of a fourth-innings hundred at The Oval in September, tried to get his way out of a gentle inswinger from Mitchell Starc. The message from the brain to hand might have been instantaneous, but the hands took a little longer to obey instructions. Consequently, he was late in getting his bat out of the way, succeeding merely in deflecting what by all accounts was a fairly harmless delivery on to his sticks.

The right-handed opener s long, lonely walk back to the hut was an odyssey in agony and despair. In his heart of hearts, Rahul must believe that, even with the injured Prithvi Shaw ruled out for the rest of the series, he has played his last Test on this tour. The vagaries of team selection and the imponderables that make cricket the glorious spectacle it is could yet offer him a lifeline, especially if the management group backs his experience ahead of rookie Karnataka mate Mayank Agarwal. But all other things being equal, Rahul will have plenty of time to reflect on the full circle his cricketing career has completed in the four years since his debut, in these very lands.

ALSO READ: The best and worst from day four of the Perth Test

The fourth-ball duck was the third time in his last 10 Test innings that Rahul had failed to tickle the scorers. There have been three other single-digit scores in that period interspersed with scores of 37 and 149 at The Oval in a lost cause, an unbeaten 33 in the second innings against Windies in Hyderabad when India were chasing a small total in September, and a counter-attacking 44 in the second innings of the Adelaide Test last week.

Sometimes, all you need is one reasonable score to turn things around. If you are batting well and spending enough time in the crease without commensurate returns, a middling hit can catalyse good times. Sadly for Rahul, he hasn t occupied the crease long enough or consistently enough to even provide an idea of whether he is batting well or not. In the 10-innings stretch between the second innings of the Southampton Test in August and the second innings here, the Karnataka opener has faced 25 or fewer deliveries six times. Even accounting for the occupational hazards associated with fronting up to the new ball time after time, that is a far higher failure rate than the market average.

The worrying mode, if not pattern, of dismissal continues to add to his woes. He has now been bowled or trapped leg before 10 times in his last 12 innings, suggesting a fallibility to the ball directed at his stumps, though there have been instances similar to Monday s dismissal when he has guided the ball from outside off on to his sticks, too.

His second-innings pyrotechnics in a relatively modest-scoring game in Adelaide should have restored his confidence, but while Rahul might profess to being in a good mental space, that isn t obvious either from his unwelcome short stays or his ponderous movements in the field. The silken elegance that dotted his consistent run of last year has completely deserted him, replaced instead with hesitancy and uncertainty that crack pacemen from England, and now Australia, are exploiting ruthlessly.

As early as in his second Test, Rahul had shown his bounce-backability. After a horror debut when he mustered 3 and 1 at the MGC, and was out in the second innings to an ill-advised pull against the express Mitchell Johnson, he celebrated a return to his preferred opening slot with a majestic 110 in the first innings of the next game in Sydney. For six hours, he held court with his stolid defence and his sparkling strokeplay. That must surely have run through his mind as he trudged back to the pavilion on Monday.

Rahul didn t score a fifty until after his third Test century, alternating between three-figures and single, and raising questions over his consistency. That must surely have run through his mind as he trudged back to the pavilion on Monday.

Once he broke the fifty jinx, Rahul courted the hundred hoodoo. He made nine fifties in 11 innings between February and November last year, but the century just wouldn t come. In all, he laboured for 28 innings between his 199 against England in Chennai in December 2016 and 149 against the same opponents earlier this year. That must surely have run through his mind as he trudged back to the pavilion on Monday.

The team management has been remarkably patient with him, even leaving out Cheteshwar Pujara in Birmingham this summer so that he could bat at No. 3, behind Shikhar Dhawan and Murali Vijay. That must surely have run through his mind as he trudged back to the pavilion on Monday.

Rahul is only 26, but his career is clearly at the crossroads. The runs have dried up, the swagger gone. His fate is perhaps no longer in his own hands, because unless he is selected, he can t press his case. But then again, it s those same hands that have let him down so often in the last year or so, so where does he turn for succour? 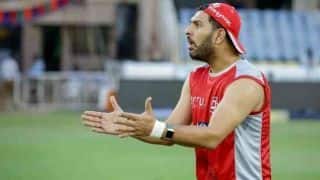