Numbers do not lie. If anything, they make it easier to figure out a player s performance. For that matter, Varun Aaron averages 34.04 from 36 matches. He has not taken a five-for so far, let alone a four-for. To make matters worse, he leaks runs at 8.75. However, the threatening weapon in his armoury is his pace. He can clock over 145 kmph. He has even rattled the best of batsmen on his day. But rarely do we see him have a good day. He often strays down leg. He often bowls outside off. He bowls too full. He bowls too short. He goes haywire, failing to maintain his consistency. IPL Auction 2017: LIVE News and Updates from IPL 10 auction

On the other hand, Ishant Sharma went unsold. He has played for Kolkata Knight Riders (KKR), Deccan Chargers (DC), Sunrisers Hyderabad (SRH), and Rising Pune Supergiants (RPS). He averages only 0.73 more than Aaron but his economy reads 0.70 lesser than Aaron s.

To put things into perspective, the only aspect that gives Aaron the edge over Tahir that Aaron is an Indian: the four-foreign-player rule may not allow Tahir a slot. If that is the case, let me tell you that Aaron was picked ahead of Irfan Pathan. Yes, he went unsold as well. Irfan s average and economy are both significantly superior to Aaron s. IPL 2017 Auction: Complete list of sold players with price, Indian Premier League 10

Irfan has an obvious edge in the batting department. As a matter of fact, he has a hundred and 6 fifties in Tests and 5 fifties in ODIs. He averages 24.50 with a strike-rate of 119 from 24 T20Is. Nonetheless, he went unsold.

Kings XI Punjab (KXIP) brought Darren Sammy, two-time World-T20 winning captain, for INR 30 lakhs, which is INR 2.5 crores less than Aaron s bid. Then they purchased Eoin Morgan, England s limited-overs captain, for INR 2 crores, 0.8 crores lesser than what they paid for Aaron. Enough bashing, I know. This is IPL. There are always a lot of surprises on offer.

In all, KXIP bought 9 players, spending 52.1 crores this season. The list also includes Martin Guptill, who had been released by Mumbai Indians (MI). He was picked up for INR 50 lakhs. Yes, a double-centurion in ODIs gets half a crore. IPL 2017 Auction: Full list of players unsold for Indian Premier League 10

With Aaron in the pace department, KXIP drafted in New Zealand speedster Matt Henry. That was that: KXIP s auction for IPL 2017.

KXIP had sacked David Miller last season as captain after their horrendous start to the tournament. They had replaced him with Murali Vijay. The fortunes did not change, as they did not rise to the top for in the points table.

Now that KXIP have Morgan and Sammy in their ranks, it will be interesting to see who they place at the helm in the tenth edition of this cash-rich league. 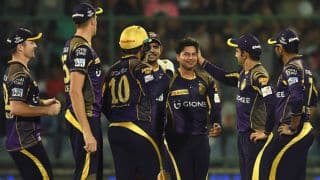