April 5 is the day when the 10th season of Indian Premier League (IPL) gets underway with the first match being played at the Rajiv Gandhi Stadium in Hyderabad. Sunrisers Hyderabad (SRH) claimed their maiden title by clinching the IPL 9, and they will square off against the runners-up Royal Challengers Bangalore. However, before that 8 franchises will have to go through the auction which will be held on Monday, February 20. As many as 352 players will go under the hammer. IPL Auction 2017: LIVE News and Updates from IPL 10 auction

Just before the auction, two major stories surfaced. While Mitchell Starc announced pulling out of the Indian domestic Twenty20 (T20) league, MS Dhoni stepped down from the captaincy of RPS, handing it over to teammate Steven Smith. Starc, who was the pace spearhead of the current runners up RCB, cited national duty and urge to play in Tests. The Australia pacer, who will lead his team s attack in the upcoming four Tests in India, was unavailable in the previous season as well, due to his injury. With Starc not present in the attack, RCB will be eager to pick a potential speedster as replacement. IPL 2017 Auction: Complete list of sold players with price, Indian Premier League 10

For RPS, with a new skipper will come new game plans and strategies which means interesting picks during the auction will be on the cards. South Africa s Dale Steyn, who was picked by GL in the previous season, had also pulled himself out of this season of IPL, which leaves the team with a slot to fill. IPL 2017 Auction: Full list of players unsold for Indian Premier League 10

In this year s auction, the new inclusions are the Afghanistan players. Names like Rashid Khan and Mohammad Nabi, who have impressed one and all with their cricket, have been picked for the first time. All in all, the auctions are done and now it is over to the main event that starts on April 5th. 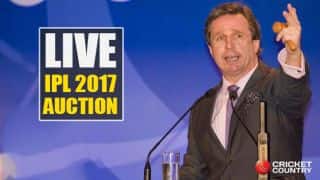 Cartoon: RPSG wanted a young captain in place of Dhoni