A look at the key talking points of match 32 of the 2019 IPL between Punjab and Rajasthan in Mohali.

Game 32 of IPL 2019 pits together Kings XI Punjab and Rajasthan Royals at Mohali in a re-match oft the contest that at the start of the tournament erupted in controversy.

Ahead of today’s KXIP vs RR match, here are the talking points:

Ashwin vs Buttler, round two

Since he ran out Buttler at the non-strikers’ end in the first game of the season for both KXIP and RR in March, Ashwin has not backed down from his stance that what he did in Jaipur was within the rules of the game.

Last week, Buttler revealed that he had buried the hatchet with Ashwin and that both players had moved on. The Englishman has his regrets over Ashwin’s action, but has vowed that he will never leave his crease again.

Buttler has struggled to dominate spin early on in the IPL – his strike-rate against the slower men is 124.7 and against the quicks it is 173 – so watch Ashwin as he makes plans when the Rajasthan opener walks out to bat.

Rajasthan skipper Ajinkya Rahane has struggled to dominate as opener this IPL, scoring 175 runs in seven games for an average of 25. His strike-rate is 134.61, which is good for Rahane, but the lack of start has let down his team. (VIDEO: Who will win Round 2 of the Ashwin-Buttler contest?)

Only thrice has he crossed 25 this season, and only once has Rahane managed a half-century. There are also scores of 0 and 5.

This has left Buttler to drive Rajasthan’s starts, which he has managed to do on several occasions, but if Rahane can come good then the franchise’s chances of winning go up exponentially.

Ben Stokes missed the last game on account of injury, which forced Rajasthan to play Englishman Liam Livingstone. The allrounder had no impact in the game, and if Stokes is fit then he should slot back. (READ: Kings XI Punjab’s Varun Chakravarthy sidelined with fracture)

Rajasthan also have New Zealand legspinner Ish Sodhi to call on, and it could be time to get him a game.

KL Rahul on Monday was named in India’s World Cup squad for the first time, no doubt largely because of his current IPL form. In eight innings, Rahul has scored 335 runs at a strike-rate of 130.85, with a century and three fifties.

That massive goal ticked off, will we see Rahul continue in the same vein or go hammer and tongs at the bowling from ball one?

If you’re into fantasy league cricket, this match is a mouth-watering prospect. Both Buttler and Chris Gayle are big draws when it comes to the world of fantasy cricket, which is no surprise given their success as openers in T20s. (READ: Dream11 predictions – KXIP vs RR)

Buttler is coming off a match-winning 89 off 43 balls in Rajasthan’s win over Mumbai Indians, which to anyone who had him in their fantasy teams – and especially as captain – was golden. Gayle has racked up scores of 63 and 99 not out in his last two innings, which indicates his form.

Between the two, who will have the bigger day? 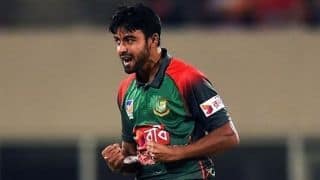