Rajasthan lost the plot after his dismissal. From 148 for two, they slumped to 164 for nine.

The Indian T20 League match between Rajasthan and Punjab at the Sawai Mansingh Stadium in Jaipur on Monday turned out to be highly controversial for Ravichandran Ashwin s bizarre move in the 13th over of the Rajasthan run-chase. (Rajasthan vs Punjab: Highlights)

The Tamil Nadu offspinner and Jos Buttler were engaged in a heated argument after the India international Mankaded the Englishmen. Ashwin, sensing that Buttler was backing up too far, paused during his action and whipped the bails off that left the wicketkeeper-batsman stunned and livid by the Punjab captain s actions during his departure. (ALSO READ: Michael Vaughan, Jofra Archer slam R Ashwin’s ‘mankad’ dismissal of Jos Buttler)

The decision was referred upstairs and the third umpire ruled it out which saw Buttler depart for 69. Rajasthan lost the plot after his dismissal. From 148 for two, they slumped to 164 for nine, as Sam Curran and Mujeeb Ur Rahman kept their cool while bowling. The duo was backed up by some fine fielding as well as Punjab breached the fortress to win their first match by 14 runs.

The Mankad dismissal triggered an outrage on social media. While many agreed the Ashwin s move was well within the laws of the game, other argued that it went against the Spirit of Cricket . 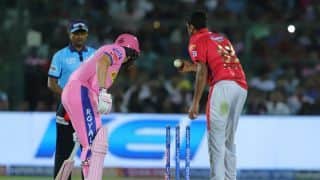