Welcome to our coverage from Match 11 of the Indian T20 League in which Hyderabad host Bangalore today.

Summary: 232 was always going to be a difficult target to chase specially with the scorching conditions at Hyderabad. Bangalore needed a mighty effort, but that didn’t happen as they lost all their star players inside the first six overs. From thereon, Colin de Grandhomme and 16-year old Prayas Ray Barman stitched a useful partnership, but it was too little too late. Afghanistan allrounder Mohammad Nabi decimate the run-chase with four wickets in his four overs going for just 11 runs. Sandeep Sharma complimented him well, Bangalore were skittled for 113. How’s that for a total as compared to Jonny Bairstow’s 114? Did Bairstow defeat Bangalore? It’s a day to forget if you’re a Bangalore fan. 11 matches to go and Bangalore can still turn the tide in their favour. Do stick around for the presentations or you can hop on to the next match of Super Sunday where Chennai, the only team undefeated in the tournament until now, face Rajasthan at Chepauk. FOLLOW all the latest action here: Rajasthan opt to bowl; Chennai bring in Mitchell Santner

Till then, from all of us here, it’s goodbye

20th over: IT’S ALL OVER! Hyderabad have completed mission demolition, the Orange Army have thrashed Bangalore by 118 runs after Sandeep Sharma takes the last wicket of Yuzvendra Chahal. Bangalore are all out for 113.

19th over: WICKET! In yet another run-out dismissal, De Grandhomme departs for 37 in what was a real sloppy effort by the Kiwi. The penultimate over by Shankar goes for 6 runs. Bangalore 110/9

18th over: WICKET! To cap it all off, a terrible mix-up between De Grandhomme and Yadav saw the latter depart for 14. Bangalore 104/8 (De Grandhomme 34, Mohammad Siraj 0)

17th over: Vijay Shankar has been introduced into the attack. With a chance to impress the Indian captain Kohli, Shankar has conceded 7 runs, which also included a boundary in the second ball by Umesh Yadav. Bangalore 102/7 (De Grandhomme 32, Umesh Yadav 14)

16th over: WICKET! Another one bites the dust. Barman gives an easy catch to Hooda at mid-wicket after Sandeep Sharma foxes the youngster with a beautfiully disguised slower delivery. Barman adds 19 to a dismal scorecard. Bangalore 86/7 in 15.1 overs.

15th over: Although the match has been done and dusted, Barman and De Grandhomme are playing quite good knocks in the middle, possibly pushing their case for selection in the next match. Bangalore 86/6 (De Grandhomme 31, Barman 19)

13th over: Colin de Grandhomme striking some blows here, Barman too joining in, this over by Bhuvi, back into the attack, going for 11 runs, one boundary each from the Kiwi allrounder and the Indian debutante Barman. Bangalore 74/6 (De Grandhomme 26, Barman 12)

12th over: Little unusual of Rashid Khan, but he’s gone for 12 runs in this over which included a massive six and a boundary by Grandhomme. Bangalore 63/6 (De Grandhomme 21, Barman 6)

11th over: Kaul was hammered to the stands by Grandhomme, this over going for 7 runs. Bangalore will need a few more of these lusty blows, but is it too little too late? Bangalore 51/6 (De Grandhomme 10, Barman 5)

10th over: Rashid Khan has been introduced into the attack and has conceded just 4 runs. Bangalore 44/6 (Barman 5, De Grandhomme 3)

9th over: Siddharth Kaul has been brought into the attack, but it looks to be all over for Bangalore. 40/6 (Barman 3, De Grandhomme 1)

8th over: A fine spell by Mohammad Nabi comes to an end, 4 overs, 11 runs and four wickets, his last over going for just 1 runs and the wicket of Shivam Dube, who went down the ground, but found Deepak Hooda at long-on. Bangalore 36/6 (Colin de Grandhomme 0, Prayas Ray Barman 1)

7th over: BIG WICKET! It looks to be all over for Bangalore. The captain Kohli has walked back after driving it straight to David Warner at cover. In the same over which turned out to be a dramatic one, a terrible mix-up between Moeen Ali and Shivam Dube saw the former run-out by Sandeep Sharma, who went for just five runs in this over. Bangalore 35/5 (Dube 5, Colin de Grandhomme 0)

6th over: Nabi almost missed to get his fourth wicket after Moeen Ali came down the ground, but Bairstow missed it completely. Bangalore 30/3 (Kohli 3, Moeen 2)

5th over: Moeen Ali has just joined his captain Kohli in the middle with a huge target staring down at them. This over from Sandeep Sharma has gone for just 2 runs. Bangalore 24/3 (Kohli 2, Moeen Ali 1)

4th over: BIG WICKET! Mohammad Nabi is the mayor of Hyderabad right now! He has taken his THIRD wicket, the BIG one of AB de Villiers, who departs for just 1, Bangalore in major trouble, 22/3 (Kohli 1, Moeen Ali 0)

3rd over: Hetmyer went after Bhuvneshwar in this over which has gone for 7 runs. Bangalore 20/1 (Kohli 0, Hetmyer 9)

2nd over: WICKET! Hyderabad have struck early in the run-chase. Mohammad Nabi bowled a full toss and Parthiv Patel went after it only to find Manish Pandey at cover. Parthiv departed for just 11. Captain Virat Kohli has joined Hetmyer in the middle. Bangalore 13/1 (Hetmyer 2, Virat Kohli 0)

1st over: Bangalore sprang a surprise pushing Shimron Hetmyer to open the innings with Parthiv Patel. Bhuvneshwar Kumar open the bowling for Hyderabad and conceded a boundary with Patel timing it nicely to the cover region. Bangalore 7/0 (Patel 6, Hetmyer 1)

Summary: This is the second highest total against Bangalore. Highest: 232/2 KXIP vs RCB, Dharamsala, 2011. It was the Warner-Bairstow show that entertained the partisan crowds at the Rajiv Gandhi International Stadium. Bangalore never were in the innings with all of their bowlers wayward so much so that captain Virat Kohli was sometimes looking clueless as to which bowler he has to throw the ball to. 59 in the powerplay, the Warner-Bairstow pair had added a record opening partnership of 185 runs. Bangalore will have to bat out of their skins to chase this one. Do they have the batsman with Rashid Khan in the bowling attack? The run-chase in a bit…

20th over: Another centurion from Hyderabad, and it’s David Warner, who has brought up his fourth Indian T20 League century. Hyderabad finish at 231/2, Warner remains unbeaten on 100

18th over: WICKET! Vijay Shankar is run out after trying to get Warner on strike, but is well short, good throw by Shimron Hetmyer. Shankar goes for 9. Hyderabad 205/2 (Warner 78, Yusuf Pathan 3)

17th over: A fine knock and one of the greatest innings of this season, Jonny Bairstow’s scintillating run comes to an end, departs for 114, Chahal strikes. Hyderabad 195/1 (Warner 71, Vijay Shankar 9)

15th over: Finally, an excellent over from Bangalore, just 3 runs coming in this Moeen Ali over. Bairstow is one short of his maiden century. Hyderabad 164/0 (Bairstow 99, Warner 64)

12th over: Hyderabad dominating proceedings over here. Umesh Yadav has just gone for 16 runs in his third over. Hyderabad 133/0 (Bairstow 84, Warner 49)

11th over: Kohli seems to be lacking quality bowlers here, Moeen back into the attack and he’s conceded 12 runs which includes a SIX by Warner. Hyderabad 117/0 (Bairstow 68, Warner 49)

9th over: FIFTY! Jonny Bairstow brings up his first Indian T20 League half-century, this one coming in just 28 deliveries. Barman’s second over goes for 18 runs, which includes a HUGE SIX and two boundaries by Bairstow. Hyderabad 89/0 (Bairstow 53, Warner 36)

8th over: Chahal into his second over and he’s gone for 6 runs. Bangalore have slowed down the run-rate of Hyderabad now. Hyderabad 71/0 (Bairstow 36, Warner 35)

7th over: The youngest debutante in Indian T20 League history, Prayas Ray Barman, has been introduced into the attack, bowling leg-spin to the Warner-Bairstow duo, the 16-year-old has been quite impressive with only six runs in his first over. Hyderabad 65/0 (Bairstow 34, Warner 31)

6th over: END OF THE 1ST POWERPLAY! 59 runs coming in the first powerplay, this over from Siraj yielding runs, Warner and Bairstow scoring in tandem as none of the bowlers are looking threatening. Hyderabad 59/0 (Bairstow 32, Warner 27)

5th over: FIFTY up for Hyderabad with Warner and Bairstow looking quite settled at the crease, but it’s getting really hot in there with temperature touching 40 degrees. This over by Umesh Yadav goes for 8 runs. Hyderabad 51/0 (Warner 27, Bairstow 24)

4th over: So, Kohli is not allowing the Hyderabad openers to settle down, makes another bowling change and brings in Mohammad Siraj into the attack, but his plan failed, as Bairstow struck back-to-back boundaries. Hyderabad 43/0 (Warner 25, Bairstow 18)

3rd over: Bowling change! Legspinner Yuzvendra Chahal comes into the attack, but David Warner does not think twice and attack the leggie straight away, smashing a boundary in the fifth delivery. 11 runs off this over. Hyderabad 32/0 (Warner 23, Bairstow 9)

2nd over: Warner goes aerial! First ball from Umesh Yadav and David Warner whacks that one down the ground for the first maximum. That was batting of the highest quality from the Australian. Hyderabad 21/0 (Warner 12, Bairstow 9)

1st over: Brilliant start! Hyderabad are off to a brilliant start with both openers — David Warner and Jonny Bairstow — smashing boundaries off Moeen Ali. Hyderabad 14/0 (Bairstow 9, Warner 5)

3:56 pm: The BIG NEWS today besides the absence of Kane Williamson is Prayas Ray Barman, who becomes youngest debutant in IPL history. Here’s more about the 16-year-old, who plays his domestic cricket for Bengal. (READ: Prayas Ray Barman, youngest to debut in IPL)

3:35 pm: Captains have their say at the toss

Bhuvneshwar Kumar: “I would have bowled too. Conditions become much better in the second half. Kane had a niggle and we thought this is the right time to give him a rest. We have made two changes in the team. Deepak Hooda and Mohammad Nabi comes in place of Kane Williamson and Shahbaz Nadeem.”

Virat Kohli: “We will bowl first. This pitch will play slow in the first half. And it will play well in the second half.”

3:31 pm: TOSS TIME! Bhuvneshwar Kumar will lead the side again for Hyderabad in the absence of Kane Williamson, who is down with a slight niggle. Virat Kohli has won the toss and Bangalore have elected to bowl.

3:22 pm: We’re minutes away from the toss. To get you in the mood this Sunday, here’s what you can expect from the Hyderabad-Bangalore match. SRH vs RCB: What we can expect

3:19 pm: Pitch report: “It is really hot. It looks like a beautiful wicket. There will be plenty of runs for the batsmen this afternoon,” says Brett Lee.

Having registered their first win of the tournament at home against Rajasthan, Hyderabad are oozing with confidence and will want to carry the momentum in their next home match when they face Bangalore in the Indian T20 League on Sunday.

Despite Sanju Samson scoring an unbeaten 102 not out, David Warner (69 off 37 balls) helped Hyderabad chase down a mammoth 199-run target for an impressive five-wicket win, their first of the season on Friday against Rajasthan. (ALSO READ: We are playing at IPL level, not club cricket fumes Virat Kohli)

After two games one at Chepauk and at home Bangalore are still searching for a win. This is the first time that Virat Kohli and Co. haven t won a game after two outing which makes this encounter all the more interesting.

Bangalore s explosive batting line-up has failed to live up to its billing. While the 70 all-out in the first game against Chennai was more due to the pitch conditions, their failure to chase down Mumbai s total of 187 at home on Thursday has brought the batting line-up in the spotlight. (ALSO READ: You destroyed my day: Sanju Samson to David Warner) 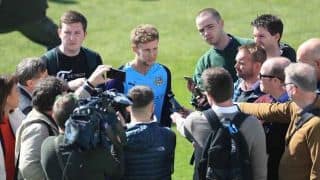 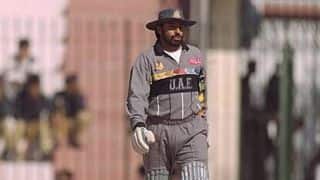