Virat Kohli was enraged after Lasith Malinga overstepped on the final ball of RCB' six-run loss.

Hosts Bangalore needed seven to win the match off the final delivery when Mumbai’s Lasith Malinga bowled a dot ball, but replays suggested the paceman had overstepped the line. (READ: Jasprit Bumrah steals a humdinger for Mumbai)

A no-ball would not only have given Bangalore one extra run but also a free hit and a chance to win the game they eventually lost by six runs.

“We are playing at the IPL level and not playing club cricket. The umpires should have had their eyes open. That’s a ridiculous call at the last ball,” Kohli said after the error was spotted at the giant screen following the end of match. “If it is a game of margins, I don’t know what is happening. They should have been more sharp and careful out there.” (READ: Bumrah’s mastery, Chahal’s bravery and that no-ball)

It was on-field umpire Sundaram Ravi, India’s only representative in ICC’s Elite panel, who was responsible for the missed no-ball.

Mumbai captain Rohit Sharma, whose team registered their first win of the Twenty20 tournament, also said such mistakes were “not good for the game”.

“There’s a TV up there, they have to watch what’s happening… Eventually it’s not good for the game and whatever is not good for the game, I won’t stand for that,” said Sharma. “Those decisions can cost you games and those games can cost you the tournament. We work really hard to win the tournament and those kind of mistakes are not acceptable.” (READ: Fuming Virat Kohli calls umpire s mistake ridiculous )

It is the second row in the first week of competition of the world’s most popular T20 league after the ‘Mankad’ dismissal of England batsman Jos Buttler that also brought the umpiring into question.

Rajasthan Royals’ Buttler was run out while backing up at the non-strikers end by Indian spinner and Kings XI Punjab captain Ravichandran Ashwin who whipped the bails off before bowling his delivery.

The method of dismissal, named after former India player Vinoo Mankad, is legal but is seen by many as going against the game’s values, unless the batsman has been warned first.

Cricketers and pundits have claimed Ashwin acted unsportingly, with some also criticising the TV umpire. 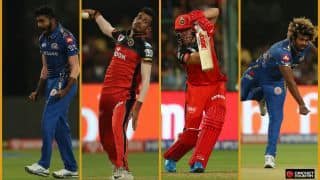