Starc was fined 50 per cent of his match fee while Pollard was fined 75 per cent.

Just when the fans had thought the Indian Premier League (IPL) could not sink any further, it reached a new nadir by letting Kieron Pollard and Mitchell Starc go away with financial sentences. Along with the fact that the punishment was ridiculously insignificant, there was another issue that went largely unnoticed. Abhishek Mukherjee has more…

So Kieron Pollard and Mitchell Starc have got away with fines, the issue has been forgotten, Shibani Dandekar is back, cheerleaders have returned to their day jobs, cricketers are tweeting the regulatory selfies, and the Indian Premier League (IPL) is underway again. There has been a general murmur that the pair had got away easily, and their responsibilities towards the sport and the next generation has been accepted as inconsequential.

In short, the world has moved on.

Though the Pollard-Starc tussle is now a matter of the past, there remains a question: what had Pollard done to be penalised more than Starc?

Let us recall the incident: Starc bounced at Pollard; the batsman went for the hook instinctively and missed; Starc unleashed a verbal barrage of unknown [but guessable] words; Pollard shrugged them off, and that was that.

Starc ran in again: this time Pollard backed away before the ball was delivered. Starc’s response was rather unusual: bowlers, under such circumstances, usually back out or bowl whatever they would have bowled anyway. Instead, Starc chose to follow Pollard, and aimed one at his body. One might argue that it was unintentional, but then, one might argue that Chris Martin was an excellent batsman who was simply unlucky.

Let us evaluate Starc’s action: Pollard had backed away, and Starc still aimed at his body. Never did it seem that he had any other intention.

A fuming Pollard raised his bat and hurled it at Starc — well, almost. He controlled the action at the last moment, but it was a tad too late: he could only loosen his grip, which made the bat drop a few feet away from him harmlessly.

Let us evaluate Pollard’s action: Starc had aimed one at his body intentionally after he had backed away. He wanted to get back with a physical retaliation, but controlled his temper at the last moment. He realised he was not doing the right thing.

Pitting the outbursts against each other, Starc was the one who never controlled his emotions: Pollard did pull out at the last moment. Yet, Andy Pycroft fined [since he was the match-referee, we can safely assume it was his decision] Starc 50 per cent of his match fee; Pollard, 75 per cent.

Was it because Pollard’s action looked worse?

Was it because the bat is potentially a more dangerous object than the ball [this can be argued upon, since Starc would have had ample time to take evasive action]?

Was it because hurling a bat is rarer than bowling at a batsman’s body?

Was the spectacle more important than the intent and the restraint shown?

Whatever it was, the discrimination in fines made as much sense as the illogically extended length of Ishant Sharma’s Test career.

(The above article has been republished with permission from DNA, where it first appeared) 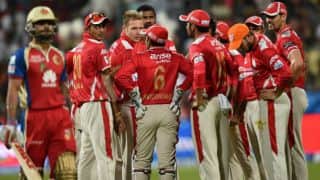