It was a simple matter of misunderstanding his captain.

More than a day after the infamous ‘BatGate’ incident (Yes, it’s mandatory in India to add “gate” to all controversies and scams), Mumbai Indians skipper Rohit Sharma revealed that it was he who had asked Pollard to “throw” his bat around, but the big West Indian took the words a bit too literally!

“Well, uhmmm (fumbles) I was trying to tell Polly [Pollard] that at this rate we were not going to anywhere as it was a good batting wicket. Since he has a good arm, and throws his bat around in the death overs, I asked him to take his chances. ‘If you can hit it clean, then you can go for it!’ But I never knew he would take it a touch too seriously and throw the bat at Mitchell Starc,” said a relaxed Rohit after Pollard was let off with a nominal fine.

Asked whether, Pollard will throw his bat around in the next match as well, the Mumbai Indian skipper replied with a wry smile, “Well, you know these West Indians have a liking for Australians and CSK [Chennai Super Kings] even have one in Ben Hilfenhaus. But you never know, he might try to throw his bat only at the ball this time around.”

While cricket is struggling to retain its gentleman tag, Pollard’s aggression has already attracted a few brand endorsements (typical for cricketers in India). A certain undergarment brand has already approached the sturdy built West Indian to promote their as ‘macho-man.’ It has also been reported that a popular youth-oriented entertainment channel is planning to rope in Pollard for their show Roadies, so that the staged violence and aggression gets the much- needed boost. 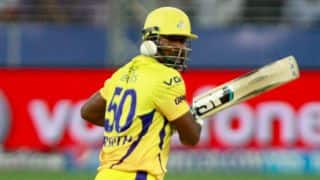