What is in store? Here are the talking points ahead of KKR vs RCB today:

For RCB, its perform or perish

There are no doubts here: RCB need to win all their remaining six matches and hope other results go their way. Lose even one, and they will have be out of the IPL playoffs race.

After losing six matches in a row, Virat Kohli’s team won their first last week to get onto the points table, but on Monday night were beaten by Mumbai Indians.

If their batting has been overly reliant on Parthiv Patel, Virat Kohli and AB de Villiers, the wickets have come mainly from Yuzvendra Chahal who has 13 scalps. Mohammed Siraj has seven wickets from eight matches but has conceded runs at 9.55 per over.

If no Russell, then who?

The last time these two teams met was in game 17 of the season. On that occasion, Bangalore made 205/3 but lost to Kolkata as Andre Russell spanked seven sixes in his unbeaten 48 off just 13 balls. (KKR vs RCB: Likely XIs, head to head, predictions)

This time, Russell is in doubt for the match as he grapples with injury. He is KKR’s leading run-getter and joint highest wicket-taker this season, so if Russell does not play the hosts will be a depleted unit.

Kolkata can call on another West Indian allrounder, Carlos Brathwaite, whom they purchased last year for Rs 5 crore. A like-for-like option with the ball and bat, though of course with not the same impact as Russell, Brathwaite looks the likely candidate.

The other choice is Englishman Joe Denly, who played one match for KKR this season and got out first ball.

Shimron Hetmyer, the hugely talented young West Indian, has in four games for RCB batted at No 5 and opened, with returns of 15 runs. Purchased for Rs 4.20 crore at last year’s IPL player auction following a good show during West Indies’ ODI series in India, Hetmyer has not had a good run.

There is a chance that he returns to face Kolkata, given that their trio of spinners – Kuldeep Yadav, Sunil Narine and Piyush Chawla – have not been as impactful against left-hand batsmen this season. In 28.2 overs bowled to left-handers in IPL 2019, KKR’s spin-bowling trio of Kuldeep, Narine and Chawla have taken just three wickets for the cost of 230 runs. (KKR vs RCB Dream11 prediction)

If Hetmyer plays, it would be at the expense of Australian allrounder Marcus Stoinis.

This season, Kohli has lost the toss five times. Each of times, Bangalore have lost the match. Dinesh Karthik, the KKR captain, has fared marginally better. Of the five tosses he has lost, Kolkata have lost on for occasions. 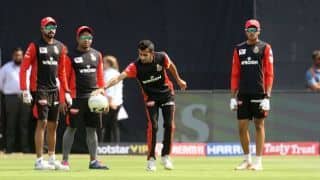 Kolkata Knight Riders vs Royal Challengers Bangalore, IPL 2019, LIVE streaming: Teams, time in IST and where to watch on TV and online in India