Pakistan thumped United Arab Emirates (UAE)  by 129 runs at Napier to register a second successive victory in the ICC Cricket World Cup 2015. Pramod Ananth sheds light on some of the key moments from the game.

Nasir Jamshed’s parched run continues: Pakistan lost an early wicket in the form of Nasir Jamshed for four in the fourth over of the match. Jamshed’s inclusion was a big surprise in the match after emphatic failures in previous games. After failing to utilise another opportunity, omission from subsequent matches seems imminent.

Ahmed Shehzad-Haris Sohail partnership: After losing an early wicket, it was important for Pakistan not to lose more wickets in a hurry. Shehzad and Sohail ensured that it didn’t happen and put on a solid 160-run stand for the second wicket. Their partnership set up an ideal platform for the middle order.  ICC Cricket World Cup 2015: Pool-wise Team Standings

UAE strike back: UAE fought back momentarily as they got the wickets of Haris Sohail (70) and Ahmed Shehzad (93) and had a chance of restricting Pakistan to a more gettable total. The match was evenly poised at the time but UAE failed to capitalise. Pakistan vs UAE at Napier: In Photos

Misbah-ul-Haq -Sohaib Maqsod partnership: After a couple of quick wickets, skipper Misbah and Maqsood built a 85-run partnership for the fourth wicket in quick time which ensured Pakistan took complete control of the match. Misbah was finally Maqsood was finally dismissed for 45 and Misbah made a 49-ball 65.

Shahid Afridi’s unique record: Afridi went into this match with 7,998 runs and he went past 8,000 runs with a huge six. With this he becomes the fourth Pakistan batsman to score 8,000 runs in ODIs and the only player to have 8,000 runs and 350 wickets or more. Afridi has 395 ODI scalps to his credit currently

UAE stumble at the beginning: UAE were reduced to 25 for three at the end of 10 overs and the match was more or less over after such a dismal start. Pakistan bowlers bowled tight lines and lengths throughout and didn’t give the UAE batsmen an inch. ICC Cricket World Cup 2015: POINTS TABLE

Mohammad Irfan walking off due to injury:  Irfan just managed to bowl three overs in the match before he walked off the field. He didn’t look comfortable in his movements and Pakistan did not want to risk him at this stage of the tournament and immediately took him out of the field. The extent of his injury is yet to be known. Read: Mohammad Irfan fit to play Pakistan vs South Africa, ICC Cricket World Cup 2015 match

Khurram Khan-Shaiman Anwar partnership: After an abysmal start, Khurram and Anwar built a slow, yet steady stand of 83 runs to add a semblance of respectability to the innings. But after Khurram was dismissed for 43, UAE could not build on their partnership the way they would’ve wanted.

Pakistan hit back with two successive wickets: After getting rid of Khurran, Pakistan struck again with Shaiman Anwar and Rohan Mustafa’s wicket in quick succession. That knocked the stuffing out of the UAE innings, who still needed an unlikely 190 runs to win with less than 11 overs to go.  ICC Cricket World Cup 2015: SCHEDULE & MATCH DETAILS

Pakistan post huge win and make progress on the points table: Pakistan have registered their second victory of the ICC Cricket World Cup 2015 and will believe that they can now make it to the quarter-final. They have shown improvement in the last two games and seem to be headed in the right direction ahead of tournament defining games against Ireland and South Africa. 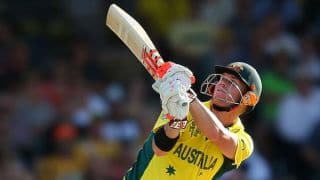