Pakistan wrapped the series up against West indies, following a convincing seven-wicket win in the fourth T20I at Port of Spian.

Following a tough tour Down Under, visitors Pakistan came up with an improved and staggering performance as they made sure that they do not repeat the same mistakes from the tour Down Under, while they executed plans perfectly to ensure a convincing 3-1 Twenty20 International (T20I) series win over hosts West Indies. Pakistan wrapped the series up, following a convincing seven-wicket win in the fourth and final T20I at the Queen’s Park Oval in Port of Spain, Trinidad on Sunday. As the series comes to a glorious end for Pakistan, there were a few talking points from the final T20I, as we take a look at the highlights from the interesting tie. FULL CRICKET SCORECARD: Pakistan vs West Indies 2017, 4th T20I at Port of Spain

Chadwick Walton’s steady knock of 40: In an other wise dull West Indian innings, it was this fellow opener in the form of Chadwick Walton, who was hardly having any effect of the West Indian collapse, as he made sure he played his game and hang on to the crease to stand any chance to give a fightback to the Pakistan bowlers. H managed to score a steady knock of 40, but fell short of his half-century by 10 runs, and a possible chance to allow West Indies pile up a good total.

Carlos’s Brathwaite’s stable unbeaten 37: Apart from Walton, it was the West Indian skipper, who was leading from the front, as West Indies were indeed in a troubled situation, following a steady top and middle-order collapse. It was him towards the end of the innings, who was providing a fight back to the Pakistan bowlers, and make sure that West Indies stand a chance to pile up a respectable total. However, the Pakistan bowlers were good enough to restrcit him from playing the big shots, while he was out of suitable partners at the other end. FULL CRICKET UPDATES: Pakistan vs West Indies 2017, 4th T20I at Port of Spain

Brathwaite-Sunil Narine’s crucial stand of 38: As Brathwaite was trying to play the captain’s knock, it was the mystery spinner Sunil Narine, who was trying to become a mystery batsman for the moment, as he was involved in a crucial 38-run stand for the seventh wicket along with the skipper, allowing Brathwaite to lead from the front and play a good innings. It was this stand that more or less allowed the hosts to go past the 100-run mark.

Hasan Ali’s brilliant spell of 2 for 12: Among the two Pakistan bowlers, who shined, Hasan Ali was one of them, as it was his brilliant spell of 2 for 12, that ensured a perfect collapse of the West Indian innings. His spell included the wickets of veteran Marlon Samuels and Jason Mohammed. It was his this performance that led to him being declared the Man of the Match. Chadwick Walton’s 40 steers WI to 124-8 vs PAK in 4th T20I

Shadab Khan’s healthy spell of 2 for 16: Apart from just Hasan, it was the young Shadab Khan, who too impressed with an equivalent spell of 2 for 16, that also ensured the perfect West Indian collapse, as his spell included the wickets of Walton and Jason Holder. With Shadab performing in each and every game, not just he has sealed hi place in the T20I and the upcoming ODI squad, but also is a contender for a Test cap.

Ahmed Shehzad-Kamran Akmal composed opening stand of 40: The Pakistan openers in the form of Ahmed Shehzad and Kamran Akmal gave the visitors a good start with the bat, as they scored a composed 40 opening runs to give Pakistan the platform to steer themselves towards a series win. It was their stand that was indeed the pillar of the Pakistan batting line-up.

Shehzad’s match-winning knock of 53: Not just the 40-run stand, but Shehzad was also involved in scoring the all-important match-winning knock of 53, which ensured Pakistan’s stability in the game, as they slowly but steadily steered towards the series win. His knock came off 45 deliveries, including six boundaries and a six, along with a strike rate of 118, which certainly sealed Pakistan’s fate in the game.

Shehzad-Babar Azam’s glorious stand of 70: Shehzad was not just involved in a perfect stand with Akmal, but also Babar Azam, who too played a subdued knock and partnered well with Shehzad to bring up the all-important 70-run stand, and snatch the game away from the grasp of the Windies. Shehzad contributed 34, while Azam too contributed 34 in the stand.

Azam’s patient knock of 38: As said above, Azam played a patient knock of 38, therefore not just allowing Shehzad to play his naturall game and innings, but also sealing the fate of Pakistan in the game, as they slowly and steadily took the game away from the grasp of the Windies, triggering a steady seven-wicket win. 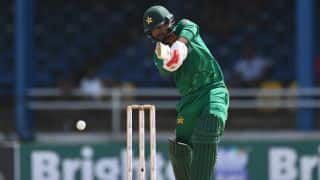