Rangana Herath: An ode to the rotund banker

Rangana Herath: An ode to the rotund banker

Rangana Herath had three wickets in three Tests in 2015 before the start of the first Test against India at Galle.

Rangana Herath had three wickets in three Tests in 2015 before the start of the first Test against India at Galle. He went wicketless in the first innings, as India piled on 375. But when he was needed the most, Herath finally found his form and class to bowl the type of spell few teams ever recover from. Stuart Broad demolished Australia at Trent Bridge just about a week ago. Herath’s spell was not as explosive, but it was no less impactful. Shiamak Unwalla pays tribute to banker who keeps bailing out the Sri Lankan cricket team. READ: Rangana Herath spins out India with 7/48 as Sri Lanka win 1st Test at Galle by 63 runs

Ever since Shane Warne bowed out of Test cricket, Australia have struggled to find a worthy replacement. They gave debuts to more spinners in five years than they did to cricketers in the previous decade. They finally settled on Nathan Lyon, a man who, while consistent, would not be considered to be in the same league as Warne even by his own mother. READ: Dinesh Chandimal’s battling unbeaten 162 could be a career-defining innings

Sri Lanka would have been wary of having a similar conundrum once Muttiah Muralitharan called time on his career. The googly-eyed wizard had been casting hexes on opposing batsmen for nearly two decades, and his loss was bound be a massive blow to Sri Lanka. But a tubby bank employee who had none of Murali’s mystique proved to wield no less magic. Ever since he became an established member of the side, Herath Mudiyanselage Rangana Keerthi Bandara Herath’s match-winning ways for Sri Lanka have been rivalled by none but Kumar Sangakkara. READ: India’s batsmen show positive signs, but need to learn how to fire collectively

Sri Lanka managed to set India 176 in the fourth innings at Galle, but on a pitch with no real demons they needed something magical; someone who could not only pull a rabbit out of the hat, but make it jump and dance the ballet. So the island nation turned to a 37-year-old banker whose weight is closer to 100 kilograms than it is to 70. He opened bowling with Dhammika Prasad and, as Ravichandran Ashwin and Amit Mishra had done the evening before, struck just before stumps. KL Rahul played for the wrong length and was struck plumb in front. India ended the day one down for 23. READ: Ravichandran Ashwin continues renaissance with six-wicket haul against Sri Lanka in 1st Test at Galle

The next morning, Shikhar Dhawan and night-watchman Ishant Sharma came out with just 153 runs needed to win and nine wickets in hand. Herath was called upon after six overs. He struck with his first ball, trapping Ishant LBW with a straighter one. Sri Lanka had drawn first blood in the morning session. In walked Rohit Sharma at No. 4. Out walked Rohit 16 balls later, bowled by one that spun more than he expected. Tharindu Kaushal took out Virat Kohli and Dhawan at the other end. India were now 60 for 5. READ: Team selection to blame for India’s loss at Galle

Ajinkya Rahane and Wriddhiman Saha had to score 116 more. Still not undoable, or so they thought. Herath continued to send down near-perfect overs. Rahane was looking good, and Saha was fresh off his maiden Test fifty in the first innings. That did not matter to Herath. He looped one on leg stump, Saha stepped out to play it away on the on side, missed it completely, and got stumped with time to spare. Herath had made Saha look like a schoolboy, and Sri Lanka were now four wickets away. Herath soon had his fifth, with Harbhajan Singh giving a regulation pad-bat catch at short leg. READ: India’s inability to finish Tests is worrying

India went to lunch reeling at 78 for 7. Rahane had batted well, and he had Ashwin for company. India needed 98 to win. Stranger things had happened. But Herath was not willing to be surprised. Ashwin tried to play one in the air after lunch, and was caught at mid-on. A brief partnership followed between Rahane and Amit Mishra, but the stand — and virtually the match — ended with Rahane’s wicket. It was probably the best of the lot from Herath. It was a perfect left-arm spinner’s dismissal: looped and flighted, pitching on middle and off, and spinning just enough to take the edge. Rahane had batted beautifully, but he had no answer to Herath. Tharindu Kaushal took the last wicket and Sri Lanka won by 63 runs, Herath taking 7 for 48. READ: The Rise of Rangana Herath

They said he was no longer good enough. They said he was old. They said his time had come. They were wrong. There is magic in the stout banker yet. India found that out in the hardest possible way. READ: India’s defeat against Sri Lanka at Galle and other defeats following big first-innings leads 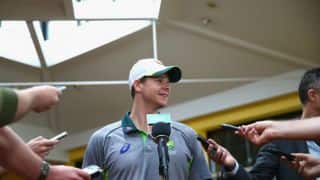 Michael Clarke should not be criticised for Ashes 2015 defeat, feels Mitchell Marsh