Shreyas Iyer had a record-breaking season in the Ranji Trophy 2015-16. He scored 1,321 runs at 73.38, which included 7 fifties and 4 tons. Only VVS Laxman has scored more runs in a single Ranji Trophy season. With so many runs under his belt, it will not be wrong to say that Shreyas played a key role in ensuring that Mumbai clinched their 41st Ranji Trophy title, without breaking much sweat. Pramod Ananth spoke to Shreyas about his season with Mumbai, India aspirations, Rahul Dravid and more

CricketCountry (CC): Congratulations on yet another excellent season. You finished as Mumbai’s leading run-scorer last season and finished as the highest run-getter in the Ranji Trophy this season. Did you make any changes to you game from the previous season?

Shreyas Iyer (SI): There have not been any changes. The only thing has been that I have gained a lot of experience from playing IPL and for India A. These things have really helped me.

CC: Your captain Aditya Tare said that you are a terrific cricketer. How has it been playing under his captaincy?

SI: Tare is a really nice captain. With all the young players it is very difficult. He has handled it very well. He was really cool. We also had Abhishek Nayar, who could share experience about past Ranji Trophy seasons. It was a great experience playing under Tare, who led the team really well. READ: Aditya Tare: Will be a dream to represent India; I’ll leave selection to selectors

CC: Was the century in the Ranji Trophy final century the most memorable knock this season or were there other moments?

SI: It was the best [century in the final]. Getting a hundred in the final was my dream and winning the Ranji Trophy was more important than that.

CC: You were dropped early in your innings in the final and cashed on it; it was the same with Siddhesh Lad, who went on to score 88. Do you think it eventually came down to good catching?

SI: I had reached almost 50 when I was dropped. Lad was also very lucky in that part. But you know, when you get a chance you have to make the best use of it. I think we lived up to that mark. I think we also won the match because of our fielders; we did not drop a single catch. Credit goes to the fielders as well.

CC: After scoring over 2,300 runs in just a couple of seasons, do you feel that an India call-up is just round the corner? Have you set yourself a timeframe inside which you want to break into the Indian team? READ: Shreyas Iyer second-highest run-getter in a Ranji Trophy season

SI: I think they should get me now into the team, but it is not my job to think about it. My aim is to keep performing well, keep doing my job; let the selectors do their jobs. I will let the bat do the talking rather than me speaking about this topic.

CC: There are some who believe you should have been selected for ICC World T20. Were you expecting to find a place in the team?

SI: I do not want to say anything about this. Even if I was picked, I would still have scored these runs. I am performing really nice. Maybe it was better to gain experience for another year then get in the team. READ: Shreyas Iyer proves mettle behind Mumbai’s 41st Ranji title; pushes case for home Tests

CC: Do you think a good performance in the Irani Trophy will go a long way in achieving the India dream?

SI: It is just another game for me. I will not be thinking about the selection process. I do not score runs thinking that I would be selected. So, I will once again look to get a good start and make it big.

CC: Your strike rate this season was close to 93 in the Ranji Trophy. Do you make a conscious effort to go hard at the bowling all the time? Is that your natural game-play?

CC: Rahul Dravid was appointed mentor of Delhi Daredevils (DD). He is someone with whom you have worked closely in India A. Pravin Amre has been your coach since school. Both of them are part of the franchise now. Do you think you will benefit a lot with both of them being with DD? READ: Delhi Daredevils not ready to let Shreyas Iyer go

SI: Yes obviously. DD retained me, which means they had faith in me. With Amre there, it will be very good. If I have any problem in my technique, he will be working on my weakness. So, it is kind of an added advantage having him besides me. Having Rahul Dravid is also very nice. He does not show any seriousness in the team, he keeps the team lively all the time. If you have any problem, he can easily sort it out as he has a big experience playing for the Indian team. You can approach him any time; he will not hesitate answering your question. It was really nice having him around. 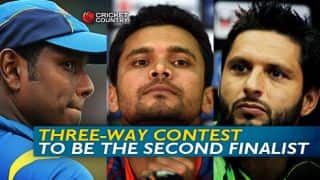