Ahead of Herath s final Test appearance in a career that began in 1999, here s a recap of his best performances.

Rangana Herath, Sri Lanka s ageless wonder, will bow out of international cricket at the end of the first Test against England in Galle. The 40-year-old is Sri Lanka s second-highest wicket-taker in Tests and the most successful left-arm spinner ever, and it is fitting that he has chosen to bow out at his favourite venue. Herath has claimed 99 wickets in Galle at an average of 24.31 and needs one wicket to become the second Sri Lankan after Muttiah Muralitharan to manage 100 there.

Ahead of Herath s final Test appearance in a career that began in 1999, here s a recap of his best performances.

In his first Test in over seven months, and having all but given up on a recall, Herath found himself jettisoned from playing in the Staffordshire League in England after answering an SOS call from Kumar Sangakkara, with Muralitharan injured. Hardly 24 hours after arriving in Galle, Herath was named in Sri Lanka s XI and bowled Sri Lanka to victory with a telling four wickets on the fourth day. Pakistan, set 168 to win, were bowled out for 117 with Herath finishing with 11.3-5-15-4 to be named Man of the Match.

After a crushing defeat in the first Test, in which Herath went wicketless, Sri Lanka roared back to win their first Test versus South Africa in 15 attempts. Herath s four wickets in the first innings helped Sri Lanka take a lead of 170, and in the second, with the hosts chasing a mammoth 450, he took 5/79 to wrap up a maiden Test victory in South Africa as the hosts slumped to 241.

Spinning the ball sharply, Herath varied his flight and angle to persistently strange the South African batsmen. His persistence was rewarded with the massive wicket of Jacques Kallis – who bagged a pair- and just before tea Herath extracted Mark Boucher. He later snapped a resolute 99-run stand between AB de Villiers and Dale Steyn, then removed Steyn and Marchant de Lange in three balls to level the series with a day to spare.

During the year in which he finished as the most successful Test bowler, Herath claimed 12 wickets in a 74-run win over England. Six of them came on day two as Sri Lanka sealed a lead of 125, with England going from 40/1 to 92/6. In the fourth innings, England were chasing a target of 340 and ran into Herath again on a turning track. He finished with his best performance in Tests.

At his favourite venue, Herath put Sri Lanka on the path to victory on day one by bowling New Zealand out for 221. His dismissals included the two main scores, Brendon McCullum (68) and Daniel Flynn (53), and then on day three, after Sri Lanka had managed a lead of just 26, Herath triggered a collapse from 34/1 to 118 with a masterful display of left-arm spin.

Stung by a series defeat to South Africa, Sri Lanka had their reputation to mend and Pakistan got the taste of it when they ran into Herath, whose 14 wickets in the second Test match helped them to a 2-0 series sweep. In the first Test it was the batsmen who set up victory; here it was the Herath show, as he picked up nine wickets in the first innings to ensure Pakistan didn’t lead by too many. A target of 271 was by no means out of reach for Pakistan, but a fifth-day pitch meant Herath put the visiting batsmen in a bind, and his 5/57 rolled Pakistan over for 165 to set up a 105-run win. A highlights package of Herath’s 14 wickets during the course of the match would be enough to gauge the repertoire of his bowling.

At the age of 37, Herath spun Sri Lanka to victory at his favourite venue, Galle. A wicketless 33 overs during India s first innings – the second time since 2000 that he had bowled that many without success in Galle – hinted at Herath s powers waning, but he dominated the fourth innings.

In 18 unbroken overs, he pulled the floor from underneath India s feet to finish with 6/35 – his best figures in Galle – to take his tally at the ground to 68 at an average of 25.73 and strike-rate of 58.4. When he dismissed Wriddhiman Saha, Herath surpassed Bishan Bedi to become the third-most successful left-arm spinner in the history of Test cricket.

Nine wickets in the first Test, of which five came in Australia s second innings as Sri Lanka claimed just their second win over them, put the hosts course for a famous 3-0 sweep. Sri Lanka set Australia a target of 268, after which Herath, at the age of 38, wheeled away figures of 33.3-16-54-5 to to script victory by 106 runs as Australia crashed to their seventh consecutive Test defeat in Asia. He started the downfall by grabbing the top order before lunch, and kept plugging away to bowl Sri Lanka to their second Test win over Australia in 27 matches dating back to 1983.

Herath s stamp proved indelible on Sri Lanka s clean sweep. In the dead rubber, he claimed 13 wickets as Sri Lanka won by 163 runs. In Australia s first innings, Herath took 6/81 from 38.1 overs and then followed up with 7/64 in 18.1 overs as the visitors lost ten wickets for 83 runs on day five. Among his scalps on the last day were Steve Smith, for the fifth time in six innings, Adam Voges, Mitchell Marsh and Peter Neville before the tail was consumed.

Herath passed 400 Test wickets in a thrilling win for Sri Lanka, who emerged victors by 21 runs in a nail-biter in the first Test versus Pakistan. Chasing 136, the home team was bowled out of 114 on a wearing final-day surface with Herath claiming 6/43 to make it 11/136 in the Test. This proved Sri Lanka s lowest defended target and handed Pakistan their first loss at the Sheikh Zayed Stadium in 10 Tests. Taking the new ball for the fourth innings, Herath dismissed Sami Aslam and Asad Shafiq and then chipped in with the wickets of Pakistan captain Sarfraz Ahmed, Hasan Ali, Mohammad Amir and Mohammad Abbas.

Asked about his success against Pakistan after crossing 100 dismissals in 20 Tests, Herath replied by saying: I have no idea. Maybe I have played more against then, that s why. 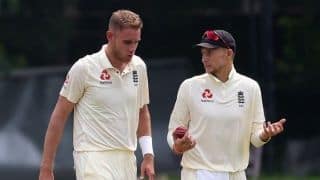 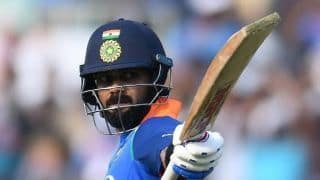