As is his wont, Suryakumar played some outrageous shots against Mumbai Indians, all without a hint of slogging.

Suryakumar Yadav’s cameo powered Kolkata Knight Riders (KKR) to a record 10th straight win in Indian Premier League (IPL). KKR opened their account in IPL 2015 with a resounding seven-wicket win over Mumbai Indians (MI), whom they had beaten convincingly in last year’s curtain raiser as well. Ankur Dhawan hails the KKR team management’s boldness which manifested in the promotion of Suryakumar to No. 4 in the batting line-up, and reckons Suryakumar could be the man to watch out henceforth. Mumbai Indians in IPL 2015: Rohit Sharma’s men approach upcoming season with renewed vigour to regain lost glory

Kolkata Knight Riders (KKR) have won IPL twice in three years. They returned from the dead to win nine on the trot last year, a laudable triumph in T20 cricket. Their astronomical success can be attributed to Gautam Gambhir’s astute captaincy, Sunil Narine’s wizardry and their penchant for identifying roles for each and every individual in the squad. There has been a set pattern to KKR’s approach every year; their predictability has occasionally bordered on the monotonous but it has paid rich dividends. Kolkata Knight Riders (KKR) in IPL 2015, Preview: A well-balanced unit with a hunger for success

The defending champions have seldom tinkered with their combination through the course of IPL. Any tweaking happens at the commencement of a new tournament, to allow players to settle into their assigned roles. Suryakumar was a designated finisher last year. He consistently won them matches with 10-ball cameos that were otherwise lost in the IPL din. In 16 matches last year, Suryakumar faced a mere 117 balls, but invariably made an impact in the last remnants of the KKR innings. The composure with which Suryakumar constructed those little forgotten gems was the most striking aspect of the young man’s batting. Suryakumar’s elevation to No. 4 in a batting line-up that boasts of some of the most fearsome hitters of a cricket ball can be attributed to the sense of security Suryakumar provided in high pressure situations.  IPL 2015 Previews

He sticks to the basics even while attacking with all his might. The head is the heaviest part of the body; if the head starts moving or falls over, the body follows suit and a batsman loses poise and balance on connection with the ball. Suryakumar’s batting is governed by an uncomplicated technique of watching the ball till the very end, (a basic most batsmen tend to forget during a bad run) coupled with the uncanny ability to find the fence in a 360-degree arc. As is his wont, Suryakumar played some outrageous shots again, without a hint of slogging. The first shot that fetched him half a dozen was a nonchalant flick over square-leg. He followed that up with four of the most pleasing sixes you’d ever wish to see. While Suryakumar favours the leg side, when Jasprit Bumrah tried to bowl full and wide outside off, the bowler was introduced to Suryakumar’s presence of mind as he watched the ball sailing over long off for a maximum. IPL 2015 schedule: IPL 8 match time table with venue details

The IPL has unearthed unknown genius every year. It has been a young man’s paradise since its introduction. Teams quickly realised how little reputations mattered in the shortest format of the game which demands a very unique skill-set, as against that in One-day Internationals (ODIs) or Test cricket. Suryakumar plays an improvisational brand of cricket in a cultured manner. The 24-year old utilised this rare opportunity to bat at up the order to the optimum, and could now cement his position in the slot as the tournament heats up. Indian Premier League (IPL) 2015: Complete coverage 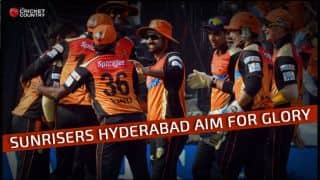