A day after the ghastly occurrence, Brendon McCullum played one of his finest Test knocks and in doing so paid the perfect tribute to cricket's fallen soldier Phillip Hughes.

On November 27, 2014, the cricket family suffered an insurmountable loss as Phillip Hughes passed away after being struck on the back of his head by a bouncer. New Zealand were playing Pakistan in a Test at Sharjah at the time. On November 28, a day after the ghastly occurrence, Brendon McCullum played one of his finest Test knocks and in doing so paid the perfect tribute to cricket’s fallen soldier Hughes. He hammered an unbeaten 153 one day after Hughes’ passing, and eventually scored a dazzling double hundred which set the foundations for one of New Zealand’s most famous wins. The knock was full of typical McCullum chutzpah but yet respected the grievant emotion of the situation. Wearing the ‘PH’ initials on his chest, McCullum reasserted through the knock that fate might have robbed cricket of a precious gem yet left the game’s spirit unharmed. READ: Phillip Hughes tragedy: Remembering the day the cricketing world was shaken

News of Hughes’ death spread quickly and the tremors of the incident were felt beyond the realms of the cricketing universe. Across the world people mourned the loss of a bubbly, hardworking, youthful cricketer who passed away due to a freak blow he suffered while batting. All recognised cricket across the globe was called off for the day. New Zealand’s Test against Pakistan was no exception. Having lost one of their comrades, players were too shocked and mournful to take field.

Yet, the next day play resumed. Players from both teams were visibly shaken and the grief had caused bitter sobbing among many of the Kiwi cricketers. They paid their honours to Hughes with a minute of silence and perhaps reluctantly got themselves to take the field. Given the gravity of the tragedy all else seemed irrelevant. READ: Thank you, Brendon McCullum

The match situation was such that Pakistan were in complete command. Pakistan were on 281 for 3 at stumps on Day One with a 1-0 series lead, having won the first Test and drawing the second. And yet, perhaps too distracted by what happened off the field, the Pakistan batsmen showed little application. New Zealand’s bowlers, as a mark of respect, desisted from bowling a single bouncer all day.

However, their lines and lengths were impeccable and Pakistan’s batsmen were tame in response. One after the other they perished; Misbah-ul-Haq and Mohammad Hafeez, the two overnight batsmen fell moments into the day. The rest of the wickets came with similar frequency. Pakistan lost the seven wickets for the addition of just 70 runs on the day. And yet, there was no celebration of any kind on New Zealand’s part. Anyone not watching the match closely would have been forgiven for assuming it was a slow session devoid of either runs or wickets. READ: Phillip Hughes death: Cricket resumes, but with a heavy heart

New Zealand were grappling with opener issues at the time, and McCullum was the stand-in opener alongside Tom Latham. Latham was dismissed cheaply but McCullum was in no mood to let that bog him down. He played free flowing strokes and lashed out at the bowling. He retained his usual style of play although one could tell looking at his face that he was incredibly distressed.

He reached one milestone after another with increasing frequency, but there was no smile on his face at any point. He found a solid accomplice in Kane Williamson, and the duo stitched a gigantic partnership. Williamson, with his calculated play, was the perfect foil for the aggressive McCullum.

It was not long before the tide that looked so favourably upon Pakistan started drifting towards New Zealand. The highlight of McCullum’s knock was the way he took on the Pakistani spinners Yasir Shah and Zulfiqar Babar. By the end of day’s play, McCullum had scored 153 while Williamson was unbeaten at 76 and New Zealand were 249 for the loss of a solitary wicket. READ: Phillip Hughes: Rest in peace

The next day, McCullum reached his double hundred and got out shortly after for a 188-ball 202, which contained 11 sixes and 21 fours. Williamson was out for 8 short of 200 as New Zealand’s first innings total wrapped up for 690, a score that was enough they did not have to bat again to confirm victory. Trent Boult and Mark Craig ran through Pakistan, bowling them out for 259 as New Zealand pulled off a famous away win.

After completion of the game, McCullum led the team off with a look of accomplishment, but the mournfulness peeked through the eyes of each man. In light of the passing of Hughes, the joy of the win was largely unfelt. Yet there was significance in McCullum’s knock. It helped ease the cricketing fraternity back into daily life. The focus on Hughes soon shifted from mourning his passing away to celebrating his short but illustrious life.

By way of emotion McCullum grieved Hughes’s death, by way of knock he celebrated Hughes’s life. His agony did not affect the manner of his play. The message was that a wicked quirk of fate was unable to impact the core essence of cricket. The cheerful, gritty character he was, it is likely Hughes would have picked McCullum’s idea of a tribute above most others. READ: Phillip Hughes A look back at his memorable career 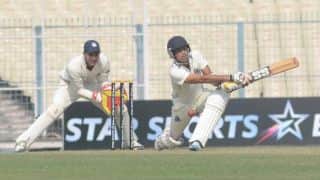 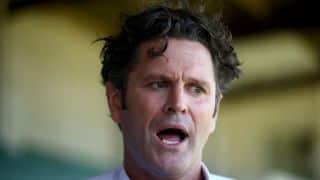