May 26, 1999 witnessed Ganguly and Dravid put up the first 300-run partnership in ODIs.

In the build-up to the 2019 ICC Cricket World Cup, CricketCountry brings to you the most memorable moments and matches from the tournament over the years right from its first edition, way back in 1975. With 50 days to go, in our latest World Cup Countdown, we rewind to the day when a record ODI partnership stunned defending champions Sri Lanka in 1999.

May 26, 1999 and Taunton will be forever etched in the history of Indian cricket when it comes to World Cups.

For it was the day on which the pair of Sourav Ganguly and Rahul Dravid hit fierce centuries in helping India pile up a record total.

Defending champions Sri Lanka were all at sea in England where they struggled to adapt to overcast conditions and surfaces on which the white ball skidded on. Unable to force the pace inside the field restriction vers as they did during their historical World Cup campaign in 1996 in Asia, Arjuna Ranatunga’s title holders were let down by their batsmen during the course of the World Cup. (READ: World Cup Countdown: 1999 – Lance Klusener deflates Sri Lanka)

But on this sunny day at Taunton, it was the bowlers who were made to look pedestrian as Ganguly and Dravid put on a record partnership of 318 in 45 overs – the best ever in ODIs.

Put in to bat by Ranatunga, India lost S Ramesh for 5 in the first over of the match. Sri Lanka’s next wicket came in the 46th over.

In the time between wickets, Dravid smacked his second successive hundred at nearly a run-a-ball and was second out for 145 off 129 balls, with 17 fours and one six.

Ganguly hit 183 off 145 balls, scoring his last 83 in only 39 balls. At the time, it was the second best individual score in a World Cup and to date, remains the best by an Indian batsman at the quadrennial event.

India lost wickets in their last few overs but ended up with 373/6, which was the second best ODI total ever.

Chaminda Vaas, who was the bowler to get Ramesh with his fifth delivery, ended up with bruising figures of 1/84 in ten overs. His new-ball partner, Eric Upashantha, went wicketless across his ten overs which went for 80. Pramodya Wickremasinghe emerged with very credible figures of 3/65 in his ten, while Muttiuah Muralitharan conceded 60 in his full quota. (READ: World Cup Countdown: 1999 Sachin Tendulkar hits memorable century after attending father’s funeral)

Up against a massive target, Sri Lanka lost their openers inside five overs and ended with 216 in 42.3 overs, to lose by a whopping 157 runs.

Robin Singh claimed 5/31, which was one of two five-wicket hauls he managed in ODIs. It was also the best bowling figures by an Indian at any World Cup, beating Kapil Dev’s 5/43.

With this win, not only did India secure much-needed points, they also gained with a significantly improved net run-rate.

Man of the match: Sourav Ganguly 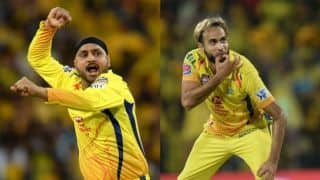