When MS Dhoni launched Kulasekara over long-on, India triumphed in the World Cup after 28 years.

In the build-up to the ICC Cricket World Cup 2019, CricketCountry brings you the most memorable moments and matches from the tournament over the years – right from its first edition, way back in 1975. With 20 days to go, in our latest World Cup Countdown we rewind to April 2, 2011 when India triumphed in the World Cup after 28 years.

After the pain of 1996, the heartbreak of 2003 and the humiliation of 2007 India surged to their second title success on the back of Gambhir’s stubborn 97 and his alliance with Dhoni which shut Sri Lanka out of the contest after they had reduced the favourites to 114/3 chasing 275.

(REWIND: The toss that caused chaos before 2011 World Cup final)

Jayawardene’s effortless unbeaten 103 had lifted Sri Lanka to a challenging total after they had been in early strife themselves, but India had their answer in Gambhir. He controlled the chase magnificently after the openers fell cheaply with a gritty innings and alongside Dhoni, who by the end of his knock cut an exhausted figure, helped guide India to a six-wicket victory.

“The pressure you go through is a lot; we felt it throughout the tournament,” was how Dhoni described being inside the Indian team’s bubble.

After six World Cups, Tendulkar was moved to tears and termed the victory as his best moment: “I couldn’t have asked for anything more than this. Winning the World Cup is the proudest moment of my life. Thanks to my team-mates. Without them, nothing would have happened. I couldn’t control my tears of joy.”

Neither could the rest of India’s cricket fans. 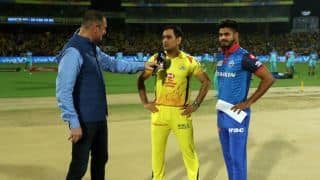 Chennai Super Kings vs Delhi Capitals, Qualifier 2, IPL 2019, LIVE streaming: Teams, time in IST and where to watch on TV and online in India 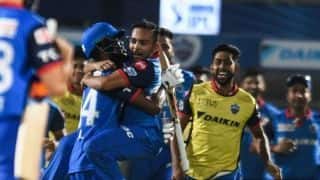