For the first time since 1992, Australia thus failed to reach the semi-finals of a World Cup.

In the build-up to the 2019 ICC Cricket World Cup, CricketCountry brings you the most memorable moments and matches from the tournament over the years – right from its first edition, way back in 1975. With 24 days to go, in our latest World Cup Countdown we rewind to March 24, 2011 when India beat defending champions Australia in the World Cup quarter-final match in Ahmedabad.

In a match with many types of ebb and flow, Yuvraj Singh and Suresh Raina provided the pivotal coil as India knocked the world champions out of the World Cup and set up the mother of all semi-finals in Mohali. Chasing 261 after Ricky Ponting‘s 30th ODI century earlier in the day, a jittery India struggled to build big partnerships against a pumped-up Australia, but as the pressure mounted, the home side had their answer in Yuvraj and Raina.

(REWIND: Australia’s exit from 2011 World Cup marks the end of an era)

Having taken two wickets in the afternoon to take his tournament tally to 11, Yuvraj was in the thick of things with the bat, controlling the chase with a cool unbeaten 67. The defining partnership of the match was between him and Raina – they kept their wits about them and the 74 run they added bailed India out of a jam and put them in charge.

Yuvraj hit the winning runs to finish not out on 57 from 65 balls and Raina was unbeaten on 34 off 28 deliveries.

Ponting’s hundred was testament to his sense of occasion. The man derided by many answered his critics with a fine innings, but Australia lost the match and, for the first time since 1992, failed to reach the semi-finals of a World Cup. 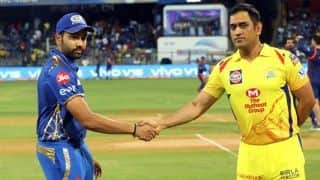