Ganguly bowled the first delivery with a cap and then in the very next ball, the Prince of Kolkata took of his cap off and revealed his hair style.

There was a time in Sourav Ganguly’s career when he started losing his hair and was quite conscious about that. Many said that it was his captaincy that took a toll and his unkempt and messy hair began balding right from the middle portion of his head. Then he immediately resorted to hair transplant as he never wanted to look old. Pick of the tweets: Sachin’s Blasters vs Warne’s Warriors, 3rd T20 at Los Angeles

During the third and final Twenty20 match of the Cricket All-Stars series 2015, Sachin’s Blasters skipper Sachin Tendulkar gave the ball to his old mate Ganguly to bowl the ninth over. He bowled the first delivery with a cap and then in the very next ball, the Prince of Kolkata took of his cap off and revealed his hair style. His hair was all messed up and just like his hair, Ganguly too messed up his over after getting hammered by Kumar Sangakkara for two fours and a six in the first three balls.

Ganguly bowled only one over, in which he conceded 16 runs. The moment Ganguly took of his cap and represented his shocking hair, twitterati began to troll him. Criclife present you best of the tweets when Ganguly was brutally trolled for his hair.

1- How you look during weekdays. 2- How u look on Sunday. #NoBathSunday pic.twitter.com/XRhh1x095n

Prince of Calcutta, with a crown of thorns ? pic.twitter.com/1b2JvYO0sI

This is what happens when the Prince wears the crown for a very long time! #PrinceOfKolkata #cricketallstars pic.twitter.com/IX7UgWFFYx

Great to see Ganguly back in action again..and his hair 😛 #AllStars

Ganguly’s hair is my single favourite thing in the whole wide World. I’m never going to another fancy dress party dressed as anything else.

Probably Ganguly is trying to get wickets with his hair than a ball. #CricketAllStars

#ganguly was more worried about his hair than bowling #cricketallstars 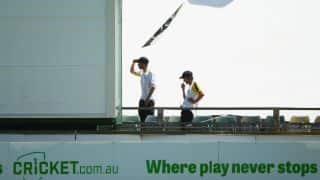