But they will be fully aware that it was at Senwes Park last year that David Miller caned the fastest T20I hundred of all time - off 35 balls.

As the series moves up the highveld to Potchefstroom, Zimbabwe are left with two matches to try and show something for their muddled tour of South Africa. The second Twenty20 international on Friday is a must-win for Zimbabwe, who lost the opening match to make it four losses in a row on tour, and they could possibly not have asked for a tougher venue to play South Africa than at Senwes Park, where last year David Miller caned the fastest T20I hundred of all time – off 35 balls.

However, with their biggest tormentor Imran Tahir rested by the South African selectors, Zimbabwe could possibly sense an opening. Tahir took six wickets, including a hat-trick, in the second ODI and in the first T20I on Tuesday he pulled the floor from under the visitors feet with five wickets in 17 balls. Peter Moor and Brandon Mavuta gave South Africa a bit of a fright in putting on 53 in 19 balls at East London, only for the wheels to come off Zimbabwe s chase.

They will know that getting across the finish line is not impossible, and with Tahir out of the fray they appear to genuinely have a better chance at upstaging South Africa.

South Africa s fourth T20I since the 2016 ICC World T20 was a mixed bag. The debutant Rassie ver der Dussen found himself needing to revive the innings from 11/2 and did so with 56 from 44 balls. An innings of fits and starts ended on 160/6 after which another poor start from Zimbabwe gave South Africa the upper hand. However, subtract Tahir s career-best 5/23 and the result would have been different.

With Tahir rested, Tabraiz Shamsi now remains South Africa s only spinner but he has yet to take a wicket in two games this series. Gihann Cloete could make way for Reeza Hendricks at the top as South Africa seek a stronger opening and JP Duminy is likely to slot into the middle order unless the management gives a chance to Robbie Frylinck.

Solomon Mire is tipped to return as opener, with Tarisai Musakanda to drop out after a golden duck on Tuesday. This would put Hamilton Masakadza back at No 3.

– Miller is two shy of 50 sixes in T20Is. Only Duminy and AB de Villiers have more for South Africa. 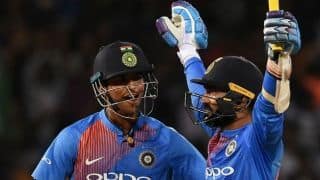