The Asghar Afghan-led side target their fifth consecutive win against Ireland in this series.

Afghanistan will eye their fifth consecutive win against Ireland as the two sides square off in the second ODI of the five-match series in Dehradun on Saturday. (READ: Afghanistan smash records, eye dream start at World Cup)

The Asghar Afghan-led side had won the three-match T20I series 3-0 and followed the good show, winning the first game of the ODI series by five wickets on Thursday. Ireland, meanwhile, will be keen to stop the losing streak as the William Porterfield s unit, who is not in contention for the 2019 ICC Cricket World Cup, will like to trouble the Afghan side who will feature in the 10-team ICC event which will kick off in England on May 30. (ALSO READ: 1st ODI: Gulbadin Naib stars as Afghanistan down Ireland)

However, for that to happen the Irish batsmen must up their game against the spin, an area which Afghanistan exploited in the T20I series and even in the first ODI as Mujeeb Ur Rahman scalped three wickets for 14 runs in his 10 overs. (ALSO READ: Rashid Khan hat-trick seals Afghanistan T20I sweep against Ireland)

Afghanistan, on the other hand, will be out to trouble Ireland with the bat and ball. While Mohammad Shahzad missed out on the three-match T20I series against Ireland after being not picked in the squad, the wicketkeeper-batsman showed signs of form, scoring 43 runs in the first ODI, with Hazratullah Zazai, who made huge gains in the recently released ICC T20I rankings following his exploits in the second T20I against Ireland, will want to continue his good run of form. (ALSO READ: Glenn Maxwell, Hazratullah Zazai, KL Rahul move up in ICC T20I rankings for batsmen)

What: Afghanistan vs Ireland, 2nd ODI

Afghanistan are unlikely to make any changes to their winning combination from the first ODI. It means the bowling combination of Rashid Khan, Mujeeb, Dawlat Zadran, Gulbadin Naib and Mohammad Nabi will once again form the core of the bowling attack.

The likes of Shahzad, Zazai, Rahmat Shah and Hashmatullah Shahidi will form the core of the batting unit with the likes of Nabi and Naib chipping in with their all-round skills in both batting and bowling departments. (ALSO READ: 2019 Cricket World Cup tracker: Are Afghanistan a serious threat?)

Ireland will need their batting to come good. While Paul Stirling scored 89 in the first game, William Porterfield, Andrew Balbirnie, Kevin O’Brien and James McCollum, who bat in the top five, must up their game and contribute heavily which will help Ireland to challenge Afghanistan.

“We are happy to win the first match of the series. It’s (chasing) not a concern. Sometimes the wicket is like that and that’s why we play carefully at times.” – Asghar Afghan

“If we did that (take early wickets) in the first 5-6 overs, we might have had a chance. We were short with the bat. No one struck it fluently.” – William Porterfield 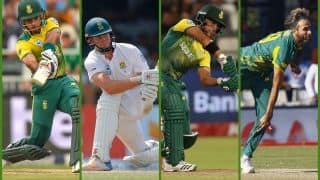