Bangladesh start the series against Pakistan on an excellent note.

Bangladesh eased past Pakistan by 79 runs in the first One-Day International (ODI) at Dhaka. Bangladesh set Pakistan a target of 330, after centuries from Tamim Iqbal and wicket-keeper Mushfiqur Rahim, took the hosts to the mammoth total. Skipper Azhar Ali, Haris Sohail and debutant Mohammad Rizwan scored half-centuries but none of them kicked on and got a big score, which eventually led to Pakistan’s downfall. Full Updates: Bangladesh vs Pakistan 2015, 1st ODI at Dhaka

Ali and vice-captain Sarfraz Ahmed opened the innings and put up 51 for the opening wicket inside 10 overs. Mohammad Hafeez walked in after Sarfraz was caught in the deep off the bowling of Arafat Sunny. Hafeez could not last long at the crease as he was run out for just four couple of overs later. Full Scorecard: Bangladesh vs Pakistan 2015, 1st ODI at Dhaka

Ali and Haris Sohail put on a valiant 89-run stand for the third wicket in quick time, which gave Pakistan hope for a while, but after Ali was dismissed for run-a-ball 72, Pakistan’s chances reduced significantly. But Rizwan looked aggressive at the outset and he was putting away poor deliveries to the fence. Meanwhile,  Sohail went to his fifty, but in the pursuit to up the ante he too fell soon after that. A lot depended on Rizwan from there but he could only manage 67 off 58 deliveries, not before he had entertained the crowd thoroughly with his excellent stroke play. Tamim Iqbal scores a vital century in Bangladesh vs Pakistan 1st ODI at Dhaka

In the end the total was a little too much for Pakistan and they will hope that they can come back as a stronger unit in the second ODI to be played at the same venue. Tamim Iqbal and Mushfiqur Rahim share best ever stand for Bangladesh

Tamim Iqbal and Mushfiqur Rahim’s excellent tons had taken Bangladesh to 329 for 6  in 50 overs. This is Bangladesh’s highest score in ODIs. Tamim and his fellow opener Soumya Sarkar got Bangladesh to a decent start.

But Sarkar was the first to go as he was run out by Wahab Riaz. Tamim tapped the ball and quickly ran, but Riaz on his follow through out-run Sarkar, picked up the ball and hit the wickets, which ended Sarkar’s innings of 36-ball 20. Bangladesh’s World Cup hero Mahmudullah  walked in at No.3 and was looking very uncomfortable during his brief stay at the crease. He eventually tried to go for a big shot off the bowling of rahat Ali and he was clean bowled for just five of 18 deliveries. Rahim brings up 3rd ODI ton in BAN-PAK 2015 1st ODI at Mirp

Tamim was then joined by wicket-keeper Mushfiqur Rahim at the other end. Rahim played cautiously initially, but once he got his eye in, he took on the bowling. Rahim was given a lifeline when he was dropped by Junaid Khan at mid-wicket when he was on 35, but he managed to cash in and make Pakistan rue that chance. Saeed Ajmal returns for Pakistan against Bangladesh in 1st ODI at Dhaka

Meanwhile, Tamim went on to score his fifth century in ODIs and he was ecstatic at reaching this landmark. The partnership between him and Rahim grew from strength to strength and looked no signs of slowing down.

The duo put on 178 for the third wicket, which is the highest partnership for Bangladesh for any wicket in ODIs. Rahim too got to his half-century and looked set to convert this into a big score. Tamim after shifting gears after he got to his century, was eventually dismissed for 132 off 135 deliveries, but had put Bangladesh in a commanding position.

Rahim was joined by the stand-in skipper Shakib-Al-Hasan and they kept the momentum going. Rahim got to him third ODI century off just 69 deliveries, which is the quickest century for Bangladesh in ODIs as Bangladesh looked to post a gigantic score. This is also the first time that two Bangladesh players have scored a century in the same innings.

Rahim and Shakib put on a quick-fire half-century partnership, which gave Bangladesh the much needed push to ensure that they got a score in excess of 330. Rahim was caught behind off the bowling of Riaz after he swung hard in pursuit of some quick runs. A couple of lusty blows from Sabbir Rahman and Shakib ensured that Bangladesh finished in a strong position. Riaz was the best bowler for Pakistan as he finished with four wickets

Earlier Bangladesh had won the toss and elected to bat first. Shakib was leading the side in the match after regular skipper Mashrafe Mortaza was handed a one-match ban for slow over-rate during the quarter-final match at the ICC Cricket World Cup match against India. Saeed Ajmal returned for Pakistan with a new improved action. His action seems to be much round-arm and the elbow seems to be fine as well. Whether he will be pulled up after the match, is to be seen.

Man of the match: Mushfiqur Rahim 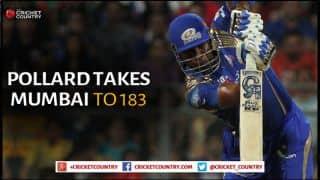 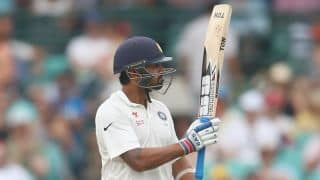