Haryana won the match by 10 wickets against Jammu & Kashmir to go top of the Group B table.

Haryana and Team India leg-spinner Amit Mishra picks up a hat-trick in the Vijay Hazare Trophy 2015-16 match against Jammu & Kashmir (J&K) at Alur. J&K were bundled out for just 75 in 22 overs and Haryana managed to win the match by 10 wickets with Harshal Patel top-scoring with an unbeaten 54. Mishra claimed the wickets of Ram Dayal, Waseem Raja and Rohit Sharma in the final three deliveries of the 22nd over to achieve this feat. Mishra therefore finished the match with figures of 3 for 4 in his two overs. It was also a match where five J&K batsmen failed to get off the mark. Full updates: Vijay Hazare Trophy 2015-16, HYD vs SER, MP vs Goa, BAR vs VID, TRI vs MAH, GUJ vs RAI, HAR vs J&K, TN vs PUN

Harshal also picked up five wickets opening the bowling as well and was on top of his game throughout. The match just lasted 33 overs and Haryana were right on top from the fist ball of the match. Haryana courtesy if this win are now on top of Group B. This win will give them confidence to perform well in the remaining matches as well. READ: Vijay Hazare 2015-16: Harshal Patel’s all-round performance help Haryana thrash J&K by 10 wickets 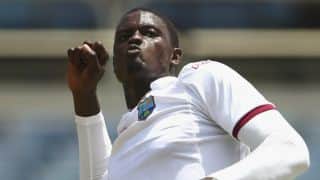