Roy could drop down to No 4 in England's Test XI while Joe Denly may open.

Having missed the second and third Tests, seamer James Anderson is reportedly in line to be named in England’s squad for the fourth Ashes Test against Australia at Old Trafford next month, while struggling opener Jason Roy will be demoted in the batting order.

According to the Daily Mail, Anderson has done enough to be added to the home team’s squad after he bowled 20 overs for Lancashire second XI, but will have to prove his fitness against next week.

The Old Trafford Test starts September 4. Should Anderson be passed fit for the Test, England will have to drop one of their three seam bowlers. Chris Woakes, who played through the World Cup, would be the one to make way for Anderson it is believed.

Anderson was passed fit for the Ashes opener but injured himself on day one of the Edgbaston Test after complaining of tightness in his right calf. He managed four overs before going for a scan during the lunch break but later came out to bat, becoming the last wicket to fall in England’s first innings. He did not bowl in Australia’s second innings.

In related news, it is also reported that Roy will move into the middle order as per England coach Trevor Bayliss’ wish.

The 29-year-old Surrey batsman was called up to England’s Test squad for the four-day match against Ireland at Lord’s last month having scored 443 runs at an average of 63.28 and strike-rate of 115.36 during the team’s historic World Cup run.

Roy made 5 and 72 in England’s win over Ireland, and was included in the home team’s squad for the Ashes. Since then, he has tallied 57 runs in six innings against Australia.

His place as opener is likely to go to Joe Denly. 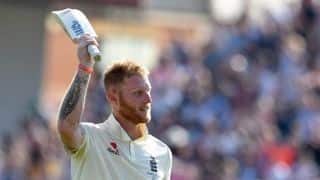