Moeen conceded his batting form in Test cricket is an issue going into the series but hoped to play with freedom in the upcoming matches.

England created history after winning the World Cup for the first time in an epic final against New Zealand at Lord’s. The Three Lions renew their heated rivalry against Australia when the first of the Ashes 2019 series gets underway at Edgbaston on Thursday and allrounder Moeen Ali is eager to lay the final nail in the coffin by winning back the urn from the opposition.

“Thinking back to the end of the last Ashes series, when Australia celebrated on the outfield of the Sydney Cricket Ground with those oversized hands on the podium rubbing in the 4-0 scoreline, it was obviously a very difficult time. Quite upsetting, really,” Moeen wrote in his column for The Guardian.

“But those are the moments as cricketers when you make a pledge to yourself that next time around it will be different. From my point of view, it would be great to send Australia home from nearly six months in the country with nothing to show for it.” (ALSO READ: World Cup hangover out of the way, England and Australia rekindle Ashes rivalry)

Moeen’s thrilled to kick-off the Ashes at Edgbaston which has been England favourite hunting ground against Australia, who have never a Test match at the venue since 2001. The hosts defeated the Aussies at the same ground during the ICC Cricket World Cup 2019 semi-final.

“Starting this series at Edgbaston for me the best ground in the country for home support, and probably the toughest for a visiting team is a big plus. It was only a couple of weeks ago that we beat Australia convincingly in that World Cup semi-final. That match will be in their minds and the plan is to hit them hard again,” he wrote.

“But clearly this only goes so far. Test cricket is a different ball game and we respect our opponents. It will be my third Ashes but I expect this one to be a bit different in terms of on-field relations. It’s well known that I have personally received some abuse in the past, but Australia are actually quite nice to play against these days.”

Meanwhile, Moeen conceded his batting form in Test cricket is an issue going into the series but hoped to play with freedom in the upcoming matches. He has played 59 Tests, averaging close to 30 with the bat. However, in the longer format, he averages around 16 in the last 16 Tests, with only two half-centuries.

“As an all-rounder I can affect every innings of the game but in all honesty, I know my batting has been a problem of late. Given I’ll probably be coming in at No 8, my primary role is with the ball and since returning to the side last summer against India my record has been strong in this department,” he said. (ALSO READ: Edgbaston pitch leaves Tim Paine stumped)

“I have accepted this for a while, the ball has been coming out nicely and in Test cricket the wickets have followed. But I would be lying if I thought the attention was on this, because even though I am not on social media these days, I am aware of the criticism of my batting in recent times.

“I have always been a player whose form goes up and down but at the moment I feel my batting confidence is at its lowest. Negative comments can affect you and they probably have. I know I play some horrendous shots at times but, when I do, I feel I attract more stick for it than others.

“I have batted everywhere in the England team and it has probably caught up with me. It’s not easy for a player who considers him or herself to be a proper batter to then adjust down the order. Put anyone there and the scores won’t necessarily come. You can lose a bit of love for it, too.” 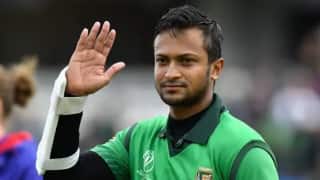