Peter Siddle, who has bowled 67 overs in the Ashes, is the most likely to be rested at Leeds.

The Australian cricket team has decided to wait until the toss at Headingley today to announce the fast bowlers picked for the third Ashes Test against England.

Top-ranked Test bowler Pat Cummins and recalled veteran Peter Siddle are the quicks who featured in the first and second Test matches, while James Pattinson made his comeback at Edgbaston only to be benched at Lord’s where Josh Hazlewood played.

Mitchell Starc has not got a look-in yet, and the uncapped Michael Neser continues to warm the bench.

The Australian selectors took the call to wait until today’s toss at Leeds before deciding which fast men to include for the third Ashes Test. All six of the candidates are fit and available to play.

Cummins, 26, played all six of Australia’s home Tests this past summer and before that lasted through the previous Ashes at home, which Australia won 4-0. Since he returned to Test cricket in March 2017, he has bowled 772 overs in the format, a number topped only by James Anderson and Stuart Broad.

Although Siddle did not manage a wicket on the last day of the first Test, Australia’s coach Justing Langer backed him to play at Lord’s while terming his day five spell at Edgbaston as “the best none-fa I’ve ever seen“. True to his word, Langer retained Siddle for the second Test and the 34-year-old returned match figures of 3/102 from 28 overs.

Pattinson made his return to Test cricket for the first time since February 2016 when the Ashes began on August 1 at Edgbaston, and bowled 35 overs of impressive pace, for returns of two wickets as Australia hammered England by 251 runs.The 29-year-old has no injury concerns, but the Australian team management opted to rest him at Lord’s given the amount of Test cricket left in the series.

Starc was the World Cup’s leading wicket-taker but has not played in the ongoing Ashes. 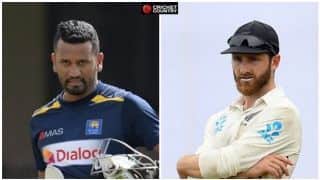 SL vs NZ, 2nd Test, Sri Lanka vs New Zealand LIVE streaming: Teams, time in IST and where to watch on TV and online in India