Those to be excluded from Bangladesh s previous ODI squad are Anamul Haque, Sabbir Rahman and Abu Jayed.

The Bangladesh Cricket Board (BCB) has named Shakib Al Hasan in the squad for the 2018 Asia Cup next month, weeks after the talismanic allrounder told reporters that he wanted to undergo surgery on a worrisome finger.

During an ODI series versus Sri Lanka in January, Shakib injured the little finger on his left hand and subsequently missed the Test and T20Is of that series. He returned in March to play the T20 Nidahas Trophy in Sri Lanka after undergoing treatment in Australia, where doctors had advised him to have surgery. Earlier this month, Shakib was Man of the Series in Bangladesh s 2-1 T20I series victory over West Indies in the Caribbean and Florida, but on arrival in Bangladesh he said that recurring pain in the finger has forced him to decide to undergo surgery soon.

For the Asia Cup that runs from September 15-28 in the UAE, the BCB has recalled Mohammad Mithun and Ariful Haque. Those to be excluded from Bangladesh s previous ODI squad – which beat West Indies 2-1 last month – are Anamul Haque, Sabbir Rahman and Abu Jayed.

Mithun, 27, last played an ODI in January and has been recalled for some good scores for Bangladesh A in Ireland. In seven limited-overs matches against Ireland A, Mithun had scores of 0, 23, 87*, 73, 9, 6 and 80. Arifil, 25, has yet to play ODI cricket but has featured in six T20Is for Bangladesh, including all three of their 2-1 win over West Indies recently.

Sabbir played all three ODIs in the Caribbean, scoring 27 runs, and was investigated by the BCB for allegedly abusing and threatening two fans on social media. There has been no clarification from the BCB on whether action has been taken against Sabbir, but his absence from the Asia Cup squad is indication enough.

Anamul also underwhelmed in the West Indies ODIs, scoring 0, 23 and 10. Jayed, uncapped at ODI level, was also been dropped.

Bangladesh, who are pooled in Group B of the Asia Cup with Sri Lanka and Afghanistan, will fly to Dubai on September 9. They play their first match versus Sri Lanka on September 15. 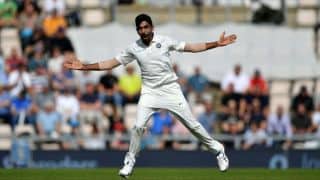