Bangladesh's only series wins so far since gaining Test status in 2000 have come against Zimbabwe and West Indies.

Dhaka: Bangladesh hope to build on their new-found confidence by securing their first-ever Test victory over Pakistan when the second and final match starts in Dhaka on Wednesday. Bangladesh: Joy of watching the Bangla Tigers succeed

The Tigers are buoyed by a remarkable fightback in the drawn first Test in Khulna where they avoided defeat for the first time in nine matches against Pakistan despite trailing by 296 runs on the first innings. Tamim Iqbal’s brilliant double-ton helps Bangladesh earn respectable draw against Pakistan in 1st Test at Khulna

The gallant display followed their dominant form against the struggling Pakistanis in the limited-overs contests where the hosts swept the one-day series 3-0 and easily won the lone Twenty20 international.

Bangladesh’s only series wins so far since gaining Test status in 2000 have come against fellow wooden-spooners Zimbabwe and against an under-strength West Indies. Tamim and Imrul register highest opening stand for a side against Pakistan in 1st Test at Khulna

But former Test captain Habibul Bashar felt the time had arrived for Bangladesh to take a major step forward and win the series against Pakistan, who are placed third in the official rankings.

“We can surely go for the kill,” Bashar said ahead of the Test at the Sher-e-Bangla stadium. “We have a positive mindset which can help us gain an edge over the opponents.

“Our comeback in Khulna raised the team’s confidence to a new level. Not many teams can do what we did against a side like Pakistan who have such a versatile bowling attack. After such a performance, the boys will naturally look for a win in Dhaka.”

Bangladesh are worried about the fitness of captain and wicketkeeper Mushfiqur Rahim, having already lost strike seam bowler Rubel Hossain for the Test due to a side strain.

Rahim hurt a finger on the right hand while attempting a catch in Khulna and left the field. He batted in the second innings but was dismissed without scoring.

Bashar, a selector, said that Rahim could be replaced behind the stumps by the uncapped Litton Das, who was a wicketkeeper at under-19 level.

“Rahim can play as a batsman alone, but if he is unable to keep, we may include Litton,” he said.

Pakistan have brought in all-rounder Bilawal Bhatti to replace seamer Rahat Ali, who had been ruled out of the tour ahead of the first Test due to a hamstring injury.

It was uncertain if star off-spinner Saeed Ajmal will be recalled after being ignored for the third one-dayer and the Khulna Test.

Ajmal, who returned to international cricket with a remodelled action in the preceding limited-overs series, failed to impress with just one wicket in three games on the tour. Ajmal told the Cricinfo website that he needed time to regain confidence and return to his best.

“I knew it will be tough moving forward,” said Ajmal. “I’d said prior to coming here that I need time and I am disappointed that I am not able to fulfil the expectations of the nation.

“But I spoke to the captain and the coach and they have a plan for me. I need time to regain my confidence. It does not come overnight.” 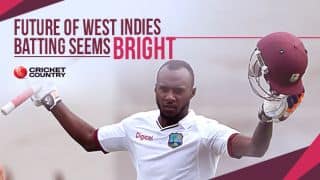