Bangladesh lost few wickets trying to consolidate but have still managed to get a big score.

Bangladesh and Afghanistan are playing the final One-Day International (ODI) with an eye on the series with the scoreline at 1-1. Winning the toss in the 3rd ODI, Bangladesh decided to bat. Tamim Iqbal‘s century sailed Bangladesh to 279 for 8 in 50 overs and their bowlers will be expected to deliver in this crunch encounter. Tamim had a fifty in the first ODI but his opening partner, Soumya Sarkar’s misery continued in the series as he fell for 23 on board. Sarkar went back to the hut adding only 11 to the team’s total. Bangladesh were cruising at 163 for 2 with Sabbir Rahman (65) adding 140 runs with Tamim, who has now also scored most number of centuries in ODIs. Bangladesh lost few wickets trying to consolidate but have still managed to get a big score.

Bangladesh have got to a competitive total but were prevented some valuable runs in the death overs as Afghanistan bowlers came back to their groove. Shakib Al Hasan was sent early at No. 4 to consolidate on the good platform provided but after Tamim was dismissed for 118, wickets started tumbling from one end. Shakib went scoring 17 as wicketkeeper-batsman, Mushfiqur Rahim followed him soon for 12. ALSO READ: Bangladesh vs Afghanistan 3rd ODI, Preview and Predictions: Visitors’ aim to create history

From being 215 for 2 in 40 overs, Bangladesh would have hoped for getting a total in excess of 300 but their lackluster lower-order and Afghanistan’s effective death bowling led Bangladesh to 279. They added only 64 runs in the last 60 balls. The same thing happened in first ODI when Bangladesh were cruising at one stage but were pulled back again in final overs.

From Afghanistan’s point of view, Mohammad Nabi, Rashid Khan, Mirwais Ashraf and Dawlat Zadran were economical and picked wickets among them but Rahmat Shah and Samiullah Shenwari were expensive. Afghanistan used as many as seven bowlers which shows their skipper tried and tested almost every option in hand to get his team back to a winning position.

Afghanistan were, however, starchy in their fielding as they dropped Tamim early in his innings and they were penalised effectively as he went onto score a big hundred for the hosts. Their batting has been good in parts whereas they have pulled back things with the bowling but will feel they have a long way to go with their fielding.

Mahmudullah rescued his team who struggled completely in the last ten overs to put bat on ball but his small cameo can prove to be the difference in the match. He has always been Bangladesh’s Mr. Consistent and played another handy knock when the chips were down for his side. ALSO READ: Tamim scores most 100s in ODIs for BAN in 3rd ODI vs AFG

Bangladesh bowlers will feel confident of defending the target as they have successfully defended once in the ongoing series against Afghanistan and will be up against the task in hand once again. Taskin Ahmed, Shakib and Mashrafe Mortaza will be Bangladesh’s key bowlers to defend 280 on board. Shakib’s middle overs will be vital in deciding the outcome of the match in Dhaka.

Bangladesh won the first ODI by a whisker coming from behind to win by 7 runs. The second ODI was also in Bangladesh’s hand for most part during their batting but flattered as Nabi and Rashid chipped in with regular wickets to dent their progress. Bangladesh did not allow Afghanistan to get past the finish line easily but Afghanistan emerged victorious by 3 wickets in the end. ALSO READ: Bangladesh vs Afghanistan LIVE Streaming: Watch 3rd ODI Live telecast & TV Coverage

The series is leveled at 1-1 and the series decided seems to be heading for a close finish. Afghanistan have a stiff chance to beat Bangladesh at home, which has become a fortress for them, as previous touring teams, like Pakistan, India and South Africa, have failed to win bilateral series here. Afghanistan have a habit of throwing their wickets while chasing and will have to bat really well to upset Bangladesh with such a big score in hand.

Mohammad Shahzad, Rahmat Shah, Nabi, Hashmatullah Shahidi and skipper, Asghar Stanikzai will have to bat out of their skin to fetch a memorable series win for them. 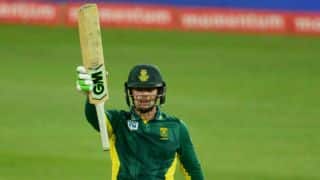