The 31-year-old Evans tonked nine boundaries and six hits over the fence en route to his unbeaten 104 off just 62 deliveries.

Put into bat, the Imrul Kayes-led Victorians reduced Kings to 28/3 in the seventh over. However, Dutch national Ryan ten Doeschate and Sussex batsman Evans forged a whopping 148 runs for the fourth wicket to steady the innings. The 31-year-old Evans, who has played 60 first-class matches, tonked nine boundaries and six hits over the fence en route to his unbeaten 104 off just 62 deliveries the first century of the BPL this season. Ten Doeschate, who brought up his fifty, was unbeaten on 59 off 41 as the Kings posted 176/3 after 20 overs.

Evans and ten Doeschate, who were watchful at the start, went hammer and tongs in the end with 74 runs coming in the last five overs. (ALSO READ: David Warner switching stance within Laws of Cricket: MCC)

In reply, Tamim Iqbal set the momentum for the run-chase with a brisk 24-ball 25 that included two boundaries and as many sixes. However, after the southpaw s departure to Kamrul Islam, none of the other batsmen managed to notch significant scores. Anamul Haque, who departed two overs after Tamim to ten Doeschate, top scored with a run more than his opening partner.

Shahid Afridi tried to revive the innings later at the end after he bashed Qais Ahmad for a couple of sixes and a boundary, but it was too little too late as the asking rate kept shooting up. (ALSO READ: Taijul Islam, Junaid Khan lead Khulna Titans to maiden win of the season)

Afridi, who scored 19, was dismissed by Islam the fast bowler who ended up as the pick of the bowlers with four for 10 in just three overs. Ahmad and ten Doeschate snapped two wickets apiece to sum up a clinical bowling effort. 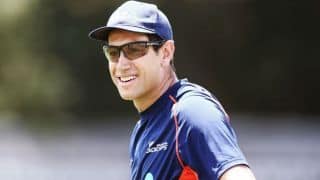