Vaughan has said that Stokes had been punished enough over the 11 months since the brawl in the early hours of September 25, 2017.

Michael Vaughan, the former England captain, believes that Ben Stokes should rightfully take his back his place in England s playing XI for the third Test against India starting Saturday at Trent Bridge.

Vaughan has said that Stokes, who on Tuesday was cleared by the Bristol Crown Court on charges of affray and subsequently recalled to England’s squad, had been punished enough over the 11 months since the brawl in the early hours of September 25, 2017 outside a Bristol nightclub that led to him being charged with affray.

Stoke was found not guilty of affray by a jury at Bristol Crown Court over a the aforementioned nightclub brawl that saw him knock a man unconscious, and Vaughan felt that it was imperative that the England allrounder be welcomed back into the team.

“I think the fact he missed the whole of the Winter in Australia is punishment enough for Ben Stokes,” tweeted Vaughan. “I personally think now he has been proven to be Not Guilty he should be allowed to play.”

Stokes’ England team-mate Jonny Bairstow, one of several players who were out with Stokes earlier that evening, welcomed the unanimous 12-member jury’s verdict.

“I am really happy,” he told Sky Sports. “It has been a long 10 months for him and his family. Hopefully we will see him back in an England shirt soon as we saw the impact he had at Edgbaston.”

An ECB statement Tuesday read: “Now that the legal proceedings have concluded, the disciplinary process for Ben Stokes and Alex Hales can be scheduled by the Cricket Discipline Commission (CDC). Considerable detail has been heard in this week-long court case and, in due course, there will be a range of matters for the Board to fully consider.”

The Professional Cricketers’ Association (PCA), in a statement, offered its support to Stokes and Hales. “As with any of our members who face difficult situations we provide the appropriate assistance,” it said. “We have been working with Ben and his legal team over the last 10 months and have provided our support throughout. The PCA will continue to provide that support to Ben and Alex Hales including during the disciplinary proceedings.” 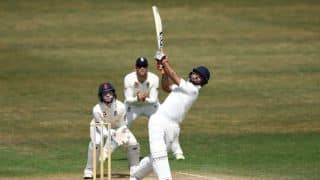