A look at the 10 best cameos of IPL 2019 that set up or finished matches in stunning manner.

Beyond the hundreds and half-centuries that many players scored, there were smaller innings that made headlines for their ferocity in the face of the odds.

Here’s a look at the 10 best cameos of IPL 2019 that set up or finished matches:

After a good start powered by Quinton de Kock, MI lost their openers in successive overs and as boundaries dried up and wickets kept falling, it looked as if CSK would keep their opponents to around 130. But thanks to Kieron Pollard, who hit three sixes in his 41 not out off 25 balls, MI ended up with a total of 148/9.

In an innings in which the best score was de Kock’s 29, Pollard getting those vital runs proved massive in a one-run win for MI.

Taking them to the doorstep of victory was Rishabh Pant with a match-winning 49 off 21 balls, with five sixes. On a trough track in Visakhapatnam, Pant kept going after the SRH bowlers as the asking rate escalated, and even though he was one of three wickets to fall in the span of 10 deliveries, Capitals would not have won without his 49.

(READ: Best of IPL 2019: The give most thrilling last-over finishes)

In Kolkata Knight Riders’ thrilling victory over SRH on day two of the IPL, Andre Russell was the game-changer with a ballistic unbeaten 49 off 19 balls. Having taken two of the three SRH wickets to fall, Russell walked out to bat after Dinesh Karthik was dismissed in the 13th over. Chasing 192, Kolkata were 95/3.

In the IPL’s 11-year history, no team had ever chased more than 52 runs in the last three overs of a game. Kolkata needed 53 off 18 balls, and Russell was nine off seven. He hit 18 in five balls during Siddarth Kaul’s 18th over, then moved to 48 off 18 at the end of the 19th bowled by Bhuvneshwar Kumar. That meant that Kolkata scored 40 runs in 12 balls. Needing 13 off the last over, the hosts won with two balls to spare.

Russell was at it again as he ransacked 48 runs off just 13 balls to lift KKR to an unlikely victory over Royal Challengers Bangalore.

In this match, the 17-year-old allrounder from Assam, Riyan Parag, showed the IPL audience what he was capable of. Chasing 176 to beat KKR, Rajasthan Royals were kept alive thanks to Parag’s 47 off 31 balls which contained five fours and two sixes.

Initially a watchful hand as Royal’s senior players did the job, Parag opened up from 22 off 21 balls by hitting Sunil Narine for six in the 17th over, followed by a hooked six off Prasid Krishna and a lofted six off Russell. He fell off the next ball when he trod onto his stumps, but the chase had been nicely set up.

In the same match, Royals had slipped to 123/6 in the 16th over when Jofra Archer came out to bat. He hit his second ball for four and fourth ball for six. Some smart running saw and a few vital boundaries from Parag helped keep RR in the hunt, and when the latter was dismissed for 47 the asking was ten runs from seven deliveries.

Archer, batting on 17 from 10 balls, declined an easy single off the last ball of the 19th over. On strike against Krishna with nine needed off six balls, he proceeded to edge four to third man and hit six over extra cover to seal a three-wicket win.

Set a target of 172 by RCB, Mumbai needed Hardik Pandya to win. The allrounder entered the chase at 129/4 in the 16th over and turned the game around by hitting five sixes and a couple of sixes to finish 37 not out at a strike-rate of 231.25.

Dropped when six off five balls by a tumbling Tim Southee at mid-off, Pandya slammed 31 runs from his next 11 deliveries faced.

When MI met CSK for the first time in IPL 2019 at the Wankhede Stadium, Pandya was in the thick of things with a vital cameo and three wickets.

During the first half, Pandya helped push a flagging innings to 170 in 20 overs which made the difference. He hit three sixes and a four in his nine-ball 25 not out.

West Indian allrounder Sherfane Rutherford had a big say on Capitals’ 16-run win over RCB at the Feroz Shah Kotla, hitting 28* to get his team to a match-winning total of 187/5 in 20 overs.

In his one major contribution of IPL 2019, the allrounder Vijay Shankar hit 35 from 15 balls in a very crucial cameo. Chasing 199, Sunrisers were in the end indebted to David Warner’s 69 and a final flurry from Yusuf Pathan and Rashid Khan, but at No 4 it was Shankar who kept the asking rate in control by smacking three sixes and a four at a strike-rate of 233.33. 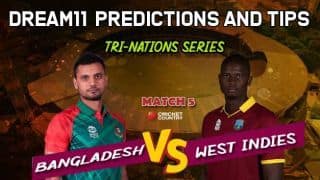 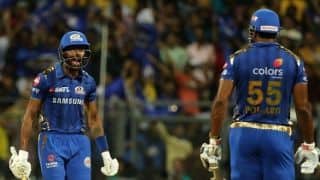