Khulna Titans scored a total of 174 opting to bat first and won the game by 14 runs.

Khulna Titans scored a total of 174 opting to bat first. Nazmul Hossain Shanto(37), Ariful Haque(35) and Cameo from Carlos Brathwaite(22) in the end helped the post this total. Khulna Titans ended up on the second position in Bangladesh Premier League (BPL) after winning the match by 14 runs.

The Comilla Victorian bowler Al-Amin Hossain picked up 3 wickets but also leaked 52 runs with an economy of 13. Graeme Cremer was most economical of all the bowlers but could not restrict Khulna from scoring 50 runs in the last three overs.

Comilla lost their first wicket in the first over itself. Mahmudullah who picked up Solomon Mire in the first over completed his spell with an economy of 5.50. Lack of big hits in the middle over costed Comilla the game. Shoaib Malik and Marlon Samuels hit a few sixes in the end overs but it was already too late for it. 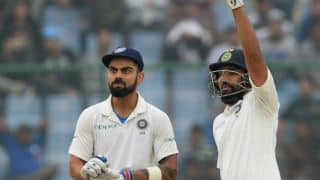