A seven-member CA board will on Monday or Tuesday conference via phone to decide whether to overturn, partially overturn or keep the bans.

The banned trio of Steven Smith, David Warner and Cameron Bancroft will learn of their fate as Cricket Australia s seven directors meet this week to discuss whether to cut short the sanctions handed out to them in the was of the ball-tampering scandal in March.

A seven-member board will on Monday or Tuesday conference via phone to decide whether to overturn, partially overturn or keep the 12-month bans handed to Smith and Warner and nine-month ban on Bancroft – the player who was picked up by cameras attempting to tamper with the ball and then trying to hide the foreign object – following the Cape Town Test.

A plea put forth by the Australian Cricketers Association (ACA) after the findings of the Longstaff review into the culture to Australian cricket and how it is run is the main focal point when CA s board sits to deliberate the matter. The ACA argued in its submission that the ball-tampering scandal was not only the fault of the cricketers, but equally of Australia s win-at-all-costs mentality.

One result is that Warner, Smith and Bancroft are allowed to return to the Sheffield Shield instead of international cricket, but there have been murmurs in the Australian media and from certain former Australian cricketers that since Bancroft has served most of his ban and Smith and Warner have four months left, it could be unfair on him.

Another scenario is that the bans are lifted and Bancroft returns to play in the Sheffield Shield and the the Big Bash League which starts in late December, and Smith and Warner allowed to play in February once the BBL ends. This could mean that the trio would have served roughly 90 per cent of their suspensions.

The ACA president Greg Dyer said in a 13-point reaction stated in a release: “Given there is now independent verification that CA’s system and culture were contributing factors, the ACA Executive calls for the lifting of the Board imposed penalties on Steve Smith, David Warner and Cameron Bancroft. My message to Cricket Australia is a simple one: these contrite men have been punished enough. Let these contrite men play,” Dyer said.”I add that the ACA will be relentless in pursuing this end.”

While Smith and Warner were permitted to play T20 cricket in Canada and the Caribbean while they serve 12-year suspensions, Bancroft has since March only played in he Northern Territory Strike League. 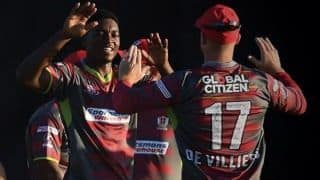