During the game against South Africa, the Balidaan Badge or the Army insignia was spotted on Dhoni s gloves as television replays showed him stumping Phehlukwayo in the 40th over of the innings bowled by Yuzvendra Chahal.

The International Cricket Council (ICC) on Friday responded to the Board of Control for Cricket in India (BCCI) on the matter of the insignia on the MS Dhoni s gloves. ICC said it is not permitted to have a logo, like the one on Dhoni s gloves at the World Cup 2019.

The ICC has responded to the BCCI to confirm the logo displayed by MS Dhoni in the previous match is not permitted to be worn on his wicket-keeping gloves at the ICC Men s Cricket World Cup 2019, said ICC in a media release.

The regulations for ICC events do not permit any individual message or logo to be displayed on any items of clothing or equipment. In addition to this, the logo also breaches the regulations in relation to what is permitted on wicketkeeper gloves, added ICC.

The BCCI had decided to back MS Dhoni for sporting a Special Forces insignia, Balidaan in his wicketkeeping gloves, to which the ICC had objected. (ALSO READ: Fans hit out at ICC for objecting to MS Dhoni wearing gloves with Special Forces’ insignia)

According to Zee News, a BCCI source stated We will go through the formality of applying for permission. . The board decided that it would stand by Dhoni as the insignia is neither commercial nor religious

Earlier, India s opening game in the ongoing World Cup saw former skipper once again profess his love for the security forces after he was spotted with regimental dagger insignia of the Indian Para Special Forces on his wicket-keeping gloves. But the ICC has asked the Board of Control for Cricket in India (BCCI) top get the symbol removed from Dhoni s gloves. (ALSO READ: ICC requests BCCI to remove army insignia from MS Dhoni’s gloves)

Speaking to IANS, Claire Furlong, ICC General Manager, Strategic Communications, said that the BCCI has been asked to get the symbol removed from Dhoni s gloves. We have requested the BCCI to get it removed, she said.

The Balidaan Badge or the Army insignia was spotted on Dhoni s gloves as television replays showed him stumping Phehlukwayo in the 40th over of the innings bowled by Yuzvendra Chahal. (ALSO READ: MS Dhoni’s identity is country’s identity, BCCI should stand with him: Sports Minister Kiren Rijiju) 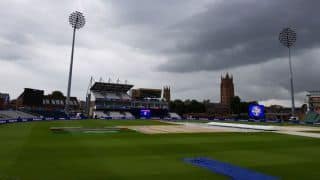