Joshi expressed satisfaction at the way the spin trio of Shakib, Mehidy Hasan and Mossadek Hossain bowled to the Afghan batsmen.

Bangladesh‘s spin bowling coach Sunil Joshi was in awe of star allrounder Shakib Al Hasan‘s phenemonal run in the ICC World Cup 2019 and described him as a “legend” of the game.

Shakib scored 51 off 69 balls to help Bangladesh post a competitive total of 262/7 and then took five for 29 to hand Afghanistan a 62-run defeat in Southampton on Monday.

Joshi expressed satisfaction at the way the spin trio of Shakib, Mehidy Hasan and Mossadek Hossain bowled to the Afghan batsmen. “As a spin coach you cannot ask for more,” said Joshi, who has played 15 Test and 69 ODIs for India between 1996 to 2001.

“Shakib is a legend, no doubt. It is a source of great pride that we have a player like that in the Bangladesh side. He is Mr Consistent for us be it with the bat, the ball or in the field. (ALSO READ: ‘Bangladesh capable enough to beat India’)

“He has really focused on his fitness and lost between five and seven kilos recently. You can see how that has paid off with his running between the wickets, you can see the hunger in his cricket. His presence is really helping us to take our whole game forward,” he added.

“He (Shakib) has been outstanding for us in the tournament, he keeps scoring runs in every game and also comes on to bowl whenever needed,” said Mortaza at the post-match presentation ceremony.

Mushfiqur Rahim (83 off 87 balls) and Shakib (51 off 69) showed their class as they batted on a difficult surface.

The star Bangladesh allrounder is currently the highest run-scorer of the 50-over showpiece with 476 runs, besides claiming 10 wickets. But personal achievements are not his priority. “I don’t rank my performance at all, but it is very satisfying when I’m contributing with both ball and bat rather than just in one sector,” said Shakib. (CHECK OUT: Latest points table updated after Afghanistan-Bangladesh game)

“It was needed and important from my perspective and the team. Luckily, I have been doing this, I am very happy with the way the tournament is going, but there are still two very important matches.”

The 32-year-old said Bangladesh always knew 260 odd runs were going to be competitive against Afghanistan. “To be honest, we thought we had enough runs on the board. It wasn’t a wicket where teams can score 300-350, we knew it was always going to be difficult,” he said.

“They have three quality spinners and we had to handle them well. That is why we managed 260, our target was to bat 50 overs and get 240 as a minimum.

“I thought it was good thinking, we wanted to bat the overs and if we got more we would take that as a bonus. That gave us enough to go out there and bowl Afghanistan out,” Shakib added. (ALSO READ: Arjun Tendulkar bowls in England nets ahead of ENG-AUS match at Lord’s)

Bangladesh will play remaining two games against India and Pakistan, and both are must win if they are to catch England and secure a place in the knockout stages.

“England have got three more matches and need to win one. We have two and have to win both. It is difficult mathematically but that’s cricket, anything can happen.

‘It will be tough but we have belief that we can pay well and get the result. That is all we can do and then we have to look at the other results.” 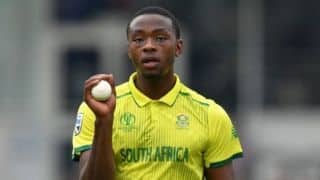 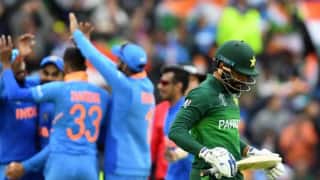