Afghanistan, playing in only their second World Cup, beat Sri Lanka soundly in last year's Asia Cup in the United Arab Emirates, but for the second match in a row this World Cup their batting let them down.

Nuwan Pradeep and Lasith Malinga starred as Sri Lanka fought back to crush Afghanistan’s hopes of a World Cup victory on Tuesday.

Afghanistan, bidding for just their second win in a World Cup match and their first over a Test nation were in command halfway through a gloomy day in Cardiff after dismissing Sri Lanka for 201

But faced with a rain-revised target of 187 in 41 overs, their batting let them down again as they were bowled out for 152.

Pradeep took a career-best four for 31, while Malinga (three for 39) struck at both ends of the innings, finishing the match with a trademark yorker that bowled Hamid Hassan. (Cricket World Cup 2019, AFG vs SL: AS IT HAPPENED)

Victory saw Sri Lanka, beaten by Afghanistan in last year’s Asia Cup, bounce back from a 10-wicket thrashing by New Zealand in their World Cup opener in Cardiff.

It was also just their second win in 11 one-day international matches this year following a defeat of non-Test nation Scotland.

But Sri Lanka’s batting remains a concern. They were set for a huge total against Afghanistan at 144 for one but lost their last nine wickets for 57 runs, with spinner Mohammad Nabi taking three in five balls.

“We had a good start but suddenly we lost a couple of wickets,” said Sri Lanka captain Dimuth Karunaratne. “That’s the negative part but otherwise bowling and fielding was a high note.”

Afghanistan in turn slumped to 57 for five, with Thisara Perera holding a brilliant running catch in the deep to dismiss Hazratullah Zazai on the hook for 30.

Afghanistan captain Gulbadin Naib (23) and Najibullah Zadran (43) started to turn the tide with a stand of 64. But paceman Pradeep struck twice, having Naib lbw before bowling Rashid Khan to leave Afghanistan 123 for seven. And when Najibullah was run out by Karunratne’s direct hit, Afghanistan were nine down.

“We lost the momentum because they scored 100 runs early on,” said Gulbadin. “We thought they would score 300-plus, so credit to Nabi for his spell there.

“Credit though should also go to the Sri Lanka bowlers for how well they bowled. The target was not too much…but we were missing something.”

Earlier, Sri Lanka started strongly against the unfancied Afghans, who suffered a seven-wicket loss to champions Australia in their tournament opener.

But they suffered a spectacular slump, with 35 extras the innings’ second-top scorer behind Kusal Perera’s 78.

A dramatic 22nd over saw Nabi bowl Lahiru Thirimanne for 25 before having Kusal Mendis caught by Rahmat Shah in the slips for two.

Angelo Mathews was next to go, for a duck, also caught by Shah. Leg-spinner Rashid Khan eventually got in on the act when he had Kusal Perera caught behind.

Rain then stopped play, with Sri Lanka 182-8. The two-hour delay meant the match was reduced to 41 overs per side.

Sri Lanka folded quickly after the resumption, losing Malinga and Pradeep for the addition of just 19 more runs. 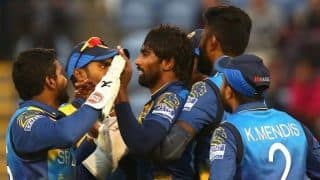 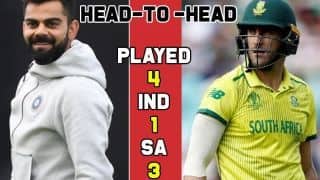