Cricket World Cup 2019: From Gayle to Buttler and Dhoni to Pandya, here are the ten power hitters who can set the stage on fire

Cricket World Cup 2019: From Gayle to Buttler and Dhoni to Pandya, here are the ten power hitters who can

Almost all teams will rely on their power hitters to come to their own and score big in the prestigious quadrennial event.

With just 15 days remaining for the start of the much-awaited 2019 World Cup, all the participating teams are busy getting their combinations right and are preparing themselves mentally and physically for the showpiece event.

It can be predicted without a doubt that the World Cup that starts on May 30 will be a high-scoring affair where teams would be posting gigantic totals on batting-friendly England pitches in the second half of summer.

Thus, almost all teams will rely on their power hitters to come to their own and score big in the prestigious quadrennial event.

Here’s a look at the top 10 power hitters who could play crucial roles in the showpiece event and take centre-stage:

Jason Roy a couple of days back said this batsman can demoralise teammates with his hitting abilities which sums it all. Buttler has been one of the most destructive batsmen at the death in recent times. Since the 2015 World Cup, he strikes at 181.2 in the last 10 overs, more than any player in the final phase of an innings.

In the second ODI against Pakistan, Buttler scored century of just 50 balls. In fact two of the fastest centuries for England have been scored by Buttler. He has a 360 degree hitting zone and that makes him a difficult customer for bowlers.

The wicketkeeper-batsman from England has been in ominous form in the last two years. Bairstow not only has the ability to play big shots, but he also knows how to rotate strike and keep the scoreboard ticking.

His power-hitting was in full display during the IPL where he scored 442 runs in 10 matches for Sunrisers Hyderabad.

Andre Russell is one of the hardest hitters of the ball among the contemporary batsmen. Like Virender Sehwag and Adam Gilchrist, Russell can inflict fear in any bowler. His ability to hit the ball a long way is not an unheard story anymore.

In the just concluded IPL, Russell was in tremendous form as he singlehandedly won many games for Kolkata Knight Riders (KKR). He amassed 510 runs in the 14 matches at a breath-taking strike rate of 204.

For sure, all teams will make special plans for Russell when they face the West Indies in the World Cup.

The big hitting Jamaican is one of the most destructive batsmen in world cricket. He has been in great form in the recent times. In 2019, Gayle has scored 424 runs in five ODIs, which include two centuries and a highest of 162.

In the just concluded IPL, Gayle scored 490 runs in the 13 matches he played for Kings XI Punjab. He smacked 34 sixes and had a strike rate of over 150 in this IPL edition. (ALSO READ: I ve not visited the gym in some time: Chris Gayle reveals fitness mantra)

What makes Gayle a terror for the bowlers is his ability to clear any boundary despite having a technique that has its flaws.

Hardik is the seaming all-rounder India had been looking for ages. Not only can he bowl those crucial overs in the middle overs and pick wickets, he can hit the ball really hard and score maximums on any ground across the world.

Although he hasn’t featured in many successful chases, but his 76 off 46 against Pakistan in Champions Trophy final and a match-winning 83 off 66 against Australia in Chennai are some of the highlights of his career so far. (ALSO READ: There is no one even closer to Hardik Pandya’s talent with both bat and ball in the Indian team: Virender Sehwag)

His recent form has been outstanding as he scored 402 runs in the 16 matches he played for Mumbai Indians in this edition of the IPL. Also, he has now added M.S. Dhoni’s famous helicopter shot to his arsenal, thus bringing more variety to his batting.

The 25-year-old, who has an overall strike rate of 116 in ODIs, has matured enough to understand what the situation demands of him and has been a regular fixture in all formats for India.

The former India skipper is not only one of the greatest finishers in the game but also holds the distinction of being one of the most clean hitters of the cricket ball. Dhoni, time and again, has proved that no one is better than him when playing in the death overs.

He might be 37, but his fitness and agility makes him one of the most destructive batsmen in world cricket. His recent form has also been great as he scored the bulk of the runs in the ODI series in Australia and England which India won comfortably. (ALSO READ: Cricket World Cup 2019: MS Dhoni gives me the freedom to do my thing – Virat Kohli)

In IPL 2019, people got to once again witness the vintage Dhoni on many occasions as he collected runs towards the end of the innings in numerous matches and single-handedly won games for the Chennai Super Kings.

If Dhoni continues with his tremendous form, chances of India clinching their third World Cup title will improve by leaps and bounds.

The swashbuckling Australian opener has been on a roll ever since he has returned to international cricket post serving his one-year ban for ball tampering. Warner won the Orange Cap in IPL 2019, scoring 692 runs in the 12 matches he played for the Sunrisers.

Short in stature, this big hitting Aussie has the ability to make any bowler have a run for his money. He, alongwith Steve Smith, will be one of Australia’s main weapon when they begin their title defence in England.

The 29-year-old South Africa batsman, on his day, can tear apart any bowling attack. Miller not only has the game suited against pacers but is also one of the few Proteas batsmen who can score big against spinners as well.

His overall strike rate in ODIs hovers around 100, making him a serious threat for the opposition. However, his recent form has not been great and he has struggled to middle the ball, a cause of concern for Faf du Plessis going into the World Cup.

Munro holds the distinction of being one of the most powerful hitters in the game of cricket at the moment. When on song, this big hitting left hander can be absolutely ruthless and can score against any opposition.

Munro, who has been scoring big for New Zealand in T20s, has an overall strike rate of 105.5 in 50 ODI matches he has played for the Black Caps. He is predominantly a leg-side player and whenever he gets the ball in his arc, more often than not, he makes sure that it reaches the fence.

The left-handed batsman has been in the limelight ever since his brilliant century in the Champions Trophy 2017 final against India, which saw Pakistan lift the trophy for the very first time. The 29-year-old, who holds the record for being the only Pakistani batsman to score a double century in ODIs, is one of Pakistan’s batting mainstays and has been among the runs in the recent past.

He made a strong statement before the World Cup by scoring a 84-ball hundred in the second ODI against England in Southampton and rang warning bells for the opposition teams. 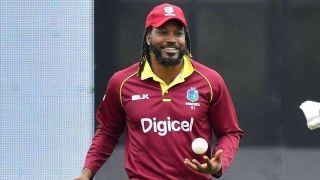 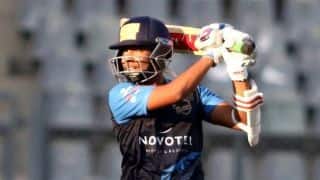 ETS vs NMP, Match 3, T20 Mumbai, LIVE streaming: Teams, time in IST and where to watch on TV and online in India