Ravi Shastri also credited Rohit Sharma's leadership as a plus for the Indian cricket team.

India captain Virat Kohli and coach Ravi Shastri have credited the tactical and physical value that MS Dhoni brings to the World Cup-bound team, with Shastri singling out the former skipper’s leadership from behind the stumps as instrumental in the side’s success.

In an interview to the Times of India, Kohli defended Dhoni from criticism of his at-times sluggish batting in ODIs and said his presence allowed him to be the aggressive captain he is.

“Honestly, I think people lack patience. An odd day here, a poor one there, and chatter becomes endless,” said Kohli. “But the fact is that MS Dhoni is among the smartest guys in the game. Behind the stumps, he’s priceless. It gives me the freedom to do my thing. Someone like MS is around with a wealth of experience.”

Having worked closely with Dhoni, Kohli termed his senior’s focus to the team cause as a huge plus for India.

“My career started under him and few have seen him from so close over the last few years as I have. There’s one thing about MS that’s far more important than anything else – and there’s a lot to him – for him, the team is always above everything else,” said Kohli. “It’s always about the team, no matter what. To top it, look at the experience he brings to the squad and we’re richer with it. Some of his dismissals behind the stumps, just recently too (in IPL 2019), were match-changing.”

(READ: There are a lot of times when Dhoni goes wrong with his tips: Kuldeep)Shastri, who has worked with Dhoni across two stints, including when he was captain of the Indian team before Kohli, stressed on the leadership role that Dhoni and Rohit Sharma, India’s limited-overs vice-captain, have in the current setup.

“MS and Rohit – both. The way they’ve gone about with their respective roles – as captains (in the IPL) – speaks volumes of what they bring to the table,” he said. “MS in particular has a legacy. So, it augurs so well for this team to have both of them in a leadership role. That’s why, the team management decided to have a strategy pool in place which MS and Rohit are part of along with us.”

Looking at the World Cup, Shastri put faith in the “best” opening pair in ODIs, Rohit and Shikhar Dhawan.

“In the current scenario, Rohit and Shikhar don’t just make for the best opening combination that India can put forward, but they’re easily the best in the world right now,” he said. 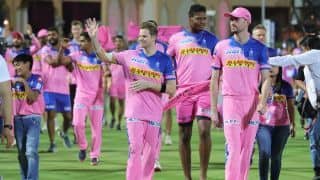