New Zealand came agonisingly close to winning a maiden World Cup before England were crowned champions on the basis of their superior boundary count.

New Zealand Cricket Tuesday said an immediate homecoming ceremony for the national team has been put on hold due to players arriving in batches at different times.

New Zealand came agonisingly close to winning a maiden World Cup before England were crowned champions on the basis of their superior boundary count – 22 fours and two sixes to New Zealand’s 17 after both the regulation 50 overs and the super over of an epic final ended in ties.

“We’ve been in conversations with the Minister for Sport and Recreation, Grant Robertson, and are mindful of the Prime Minister’s (Jacinda Ardern) enthusiasm for a welcome-home celebration,” NZC chief executive David White was quoted as saying by stuff.co.nz. (ALSO READ: ‘Awarding six runs to England was a clear mistake by Kumar Dharmasena and Marais Erasmus’)

“At the moment, however, with some players arriving back at different times, some not arriving back at all, and others having alternative playing commitments, it’s just not practical,” he added.

White acknowledged the calls from New Zealand public for a grand welcome ceremony befitting the team’s lion-hearted performance in the showpiece.

“Hopefully, given the interest surrounding this, we can organise something appropriate in the weeks to come.”

Opting to bat, New Zealand had put up a modest 241 for eight. In reply, England ended at the same score leading to the one-over eliminator.

In the Super Over, England batted first and the duo of Ben Stokes, who kept the hosts in the game with a brilliant 84 off 98 balls, and Jos Buttler made 15. (ALSO READ: A ‘real shame’ the trophy was decided on boundary count, rues Kane Williamson)

New Zealand also ended at the same score but for the loss of one wicket, paving the way for an English victory on boundary count. 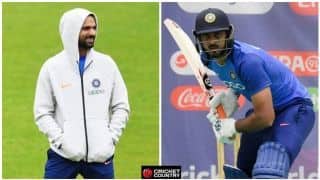